Remove the dam made by S.I.N (succeeded).

Dhalsim is one of the major protagonists of the video-game series Street Fighter. He is a yoga master competing as the main representative from India.

Dhalsim has spent years dispelling himself and as such is reserved and stoic for most of the series. He prefers pacifism and greatly resented needing to resort to violence. The only things that can move Dhalsim to violence are the lives of other being put at stake through his in-action. Dhalsim has a wife called Sally and a son called Data that he loves very much. Dhalsim always felt responsible for his village and since he won them stability became something of a regional Paragon.

His intense yoga training has enabled Dhalsim to contort and extend his limbs into forms physically impossible for a normal human. He can project his arms and legs outward in order to deliver attacks that would be out of the range of normal limbs, and teleporting to maintain the distance. Likewise, he also has the ability to breathe fire in various ways.

Dhalsim was first introduced in Street Fighter II as one of eight main playable characters. Dhalsim's skill set allowed him to attack from a distance even with normal attacks, beating him had to do with overcoming his move combos to get close enough to hit him directly. Dialog from Dhalsim had to do with him rejecting using one's skills for violence and him regretting needing to resort to it himself to address the other fighters. His goal is to win the prize money from the world tournament to feed his poverty stricken village.

In Street Fighter 3, Dhalsim's main goal is to strike out against the evil M. Bison. During his travels Dhalsim meets Bison's enforcers, Rose and Birdie, and uses telepathy to find out Bison's location. While reading her mnd, Dhalsim discovers that Cammy White had been brainwashed by Bison and uses hypnosis to make Cammy reassert control over her own mind - freeing her from Bison's control. Though in his play-through he confronts Bison and destroys the Shadaloo this is not considered cannon to the following games.

As of Street Fighter IV, Dhalsim's village is flooded after S.I.N. builds a dam upstream. Dhalsim's son, Datta, was a pen-pals of Amy, Guile's daughter. Through Amy and thus Datta, Dhalsim learns that Guile went missing on a mission to investigate dam. Dhalsim sees a potentially serious situation in both his village's future and his former rival and current ally's safety. Due to the situation Dhalsim reluctantly decides to once again use his powers for combat. Dhalsim participates in the S.I.N.'s tournament S.I.N. to resolve both issues. 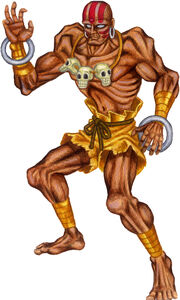 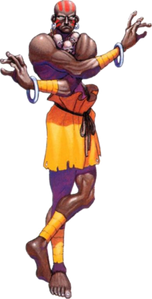 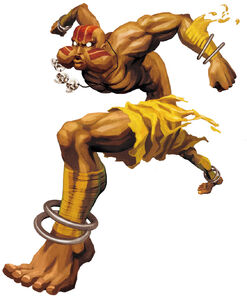 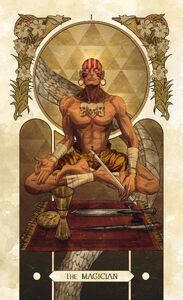 Dhalsim on a tarot card (courtesy of Capcom artwork collection)