Heroes Wiki
Register
Don't have an account?
Sign In
Advertisement
in: Legendary Heroes, Heroes Of Folklore, Mythology,
and 50 more

Dhampirs are mortal beings who are half-human and half-vampire. They are known to have all of the strengths of vampires with few to none of the weaknesses. Dhampirs have been known to hunt the undead, especially vampires. In some parts of Serbia, it was believed that vampires are invisible and that only a dhampir (himself/herself a half-vampire) could find them.

Although folkloric vampires are supposed to be sterile due to their undead status, in the Balkans the myth states that male vampires can return to his wife or the woman who attracted him when he was alive to copulate and procreate. In Bulgarian folklore, it is said that vampires also assaulted virgin women

A vampire could even travel to a town where he was not known, marry and have children. The belief in sexual activity of vampires seems to be a peculiarity of the South Slavs, in contrast to the beliefs of other Slavs, although there are similarities with the legends of Belarus.

They are attributed certain characteristics of vampires inherited from their progenitors but not their weaknesses and they would have the ability to detect vampires even when they are invisible, as well as to destroy or stop them, for which they were feared and respected and used to be hired as vampire hunters.

One way they detected vampires was by looking through their shirt sleeves, a method they also used to allow others to see the vampire. The dhampirs according to the tradition could transmit their abilities to their descendants as an inheritable trait that was impossible to pass on to strangers. Generally the dhampirs were born after two generations.

Many dhampyrs tend to die at birth, but those who live to adulthood often reject their vampiric heritage. They must train hard to increase their speed, stamina, and strength, but they often hunt vampires and other mythical beings.

A dhampyr can kill a vampire by shooting him with a bullet, transfiguring him with a hawthorn stake, or by performing a ceremony that involves touching lead crowns at the vampire's grave. If the dhampyr cannot kill the vampire, he can order it to leave the area. 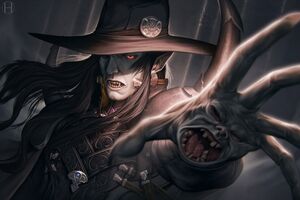 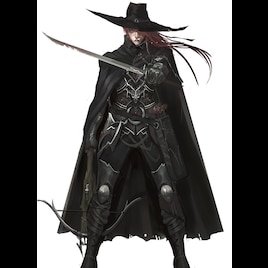 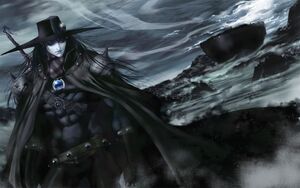 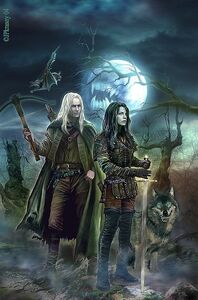