Some time before the beginning of the series, Captain Mitchell and his two children, Dana and Ryan, got in a car crash and were left hanging over a cliff, clinging to a tree root. While Mitchell had a secure grip on Dana, Ryan was hanging onto his shoe and was about to fall when Diabolico appeared before Captain Mitchell in spirit form and said that he would save his son, but only if Ryan would belong to him afterwards. Though at first he refused, the Captain agreed when his son began to fall and, after catching the boy, Diabolico told Mitchell that he wouldn’t see him again until his twentieth birthday. Afterwards, the Demon Lord trained Ryan as a warrior so as to use him as a soldier of the demons.

Diabolico was eventually freed along with the rest of the demons and he lead them in attacks on Mariner Bay. However his plans failed constantly thanks to the Power Rangers and Queen Bansheera threatened to take his Star Power and give it to her son, Impus. Diabolico considered killing the demon infant at one point, but he lost the chance to do so. After the destruction of his monster, Troika, the demon grew to giant size to destroy the Power Rangers himself and proved able to easily match the Rangers. However, they formed the Lightspeed Solarzord and destroyed Diabolico by absorbing one of his blasts and using the energy to charge their cannons, the blast from which annihilated him. The Star Power left the explosion and came to Impus, transforming him into Olympius.

However Diabolico was brought back by Vypra and Loki, who had almost been destroyed by Olympius’ monster, Vilevine. He returned to Queen Bansheera’s side to try and regain favor with her and get back his Star Power. At one point, Diabolico succeeded in trapping Olympius in the Shadow World, where all the destroyed demons dwelled.

However, Prince Olympius escaped and Bansheera forced the demon to destroy his longtime friend, Loki, as a punishment. Diabolico turned on his Queen and told the Red Ranger where he should strike her to destroy her, but Bansheera survived.

Diabolico attempted to flee from the Demon Queen but was defeated by Olympius in vengeance. After being brought back to Bansheera, he was transformed into a mindless slave and the two attacked the Power Rangers. However the Red Ranger managed to free Diabolico and he turned on Olympius after giving the Rangers the key to the tomb where the demons had been imprisoned. He was destroyed by the Demon Prince, who was in turn destroyed by the Rangers.

But Bansheera resurrected them both as Super Demons. Despite their power, the two were destroyed by the Power Rangers new Lifeforce Megazord. Later, during the final battle with Bansheera, she and the Red Ranger were stuck suspended over the Shadow World. Diabolico's spirit appeared and freed Carter before pulling Bansheera down, enacting his final revenge.

Despite being a villain, when he was forced to shoot Loki and destroyed him along with the rangers, he ultimately defects from Queen Bansheera's side and ultimately became a short-lived and permanent ally of the Rangers. In the season finale, he was able to exact his revenge, helping the rangers destroy Queen Bansheera once and for all.

Diabolico is able to appear in a spirit form, doing so even when he was imprisoned and can also create storms. He is also able to fire energy blasts and wields a skull themed, two bladed staff in combat. Diabolico has also demonstrated a strange ability to detach his right hand and grab his opponent with it, then bring the rest of his body towards them. Even without the Star Power, Diabolico is quite powerful, almost able to best Olympius in their first encounter. With the Star Power, he is extremely powerful, able to use one of his energy beams to cut a hole through the Supertrain Megazord. After becoming a Super Demon, Diabolico became even more powerful, wielding a large jewel-encrusted sword in combat. 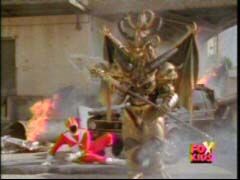 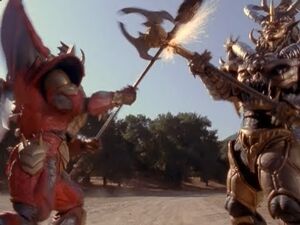 Diabolico fighting Prince Olympius.
Add a photo to this gallery

Retrieved from "https://hero.fandom.com/wiki/Diabolico?oldid=2022306"
Community content is available under CC-BY-SA unless otherwise noted.