Destroy the world after being controlled by Cyrus (formerly)

Dialga is a Steel-Dragon Type Legendary Pokémon introduced in Generation IV. It is also the Version Mascot of Pokémon Diamond. Dialga is a member of the creation trio, along with Palkia and Giratina.

Dialga was created when Arceus hatched from its egg and created the world. Arceus tasked Dialga, Palkia, and Giratina to create the universe—time, space, and anti-matter respectively. Dialga was worshiped as the master of time and metal, as it is a steel-type pokémon. It is said that time flows whenever Dialga's heartbeat pulsates.

Dialga was going to be used by Cyrus to destroy the world until Uxie, Mesprit and Azelf destroy the Red Chain which would have created the new universe. Afterwards, a battle with Dialga will initiate when playing Pokémon Diamond. It cannot be battled in Pokémon Pearl. In Pokémon Platinum, Dialga can be battled in the post-game along with Palkia. Its signature move is Roar of Time.

Dialga appears in the stage Spear Pillar as a stage hazard, where it can shoot beams, slow down time or distort the stage. Aside from that, it is a trophy.

Dialga has the ability Pressure, which causes the opposing Pokémon to use twice as much PP for every successful hit. Dialga has the ability to control time. Dialga, like many other Dragon-type Pokémon, can use many different elemental attacks. It is also one of the few Pokémon that can learn the move Aura Sphere. Capturing it gives an item called the Adamant Orb, which strengthens Dialga's Steel and Dragon Type moves by 20%. 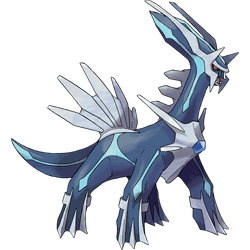 Dialga corrupted by the Evil Hoopa

Dialga with Arceus, Palkia and Giratina.