Diamond Destiny is produced in the storks factory by accident and Junior, Cornerstore's top delivery stork, along with the help of Tulip must deliver her to her rightful family before Junior's boss, Hunter finds out. As a sweet bundle of joy, Diamond Destiny can be immensely hard for any mature person or stork to resist. Once she is delivered to her family, it will feel hard to leave her.

Nate Gardner's parents are workaholics who neglect him. He decides he wants a brother, so he writes a letter to the storks asking for one. After Tulip inserts Nate's letter into the Baby Maker, she is created and put into a metal pod. Junior is worried about what to do with her, he tries to deliver her but is unable to fly after breaking a wing, so both Tulip and Junior go into an adventure to deliver her to her family. 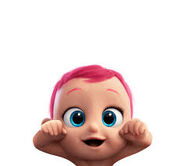 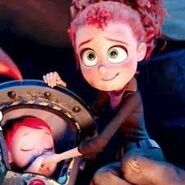 When Junior finally delivers Diamond Destiny to her new family and says good bye to her, he envisions her future. During that mind sequence, when Diamond Destiny is depicted as a ballerina, she bares a striking resemblance to Tulip with a similar hair style. This could be a tribute to the fact that she and Tulip have the same birthday. Plus, it could signify her relationship with Tulip, not to mention they each have a similar hair color (Tulip's being red and Diamond Destiny's being pink which is the mixture of red and white).

Retrieved from "https://hero.fandom.com/wiki/Diamond_Destiny?oldid=1247640"
Community content is available under CC-BY-SA unless otherwise noted.