Diamondhead is one of Ben Tennyson's Alien Egos from the first Ben 10 series, He has crystal based powers.

In the Original Series, Diamondhead is a pale green crystalline humanoid alien, His body is made of durable organic crystals, He has semi-cubic shape head, He has two long crystal shards on his back and two small crystals shards. He also has yellow eyes.

Diamondhead wears a black and white uniform which is half black on the right and half white on the left.

In Alien Force and Ultimate Alien, Diamondhead no longer wears his black and white uniform, but is now consisting with indigo silicon between his lower body, torso, and top of his head. He now has six crystal shards on his back instead of four and also has two small more on the front of his chest. He has black lies and dots over his body, his eyes are green, and wears the Omnitrix/Ultimatrix symbol on his chest.

In Omniverse, Diamondhead now wears a black clothing with a large green stripe down the middle on his belt, and also wears blast pants. He wears a green belt with white stripes and the Omnitrix symbol on it. Diamondhead no longer has the two crystal shards on his chest, and now only has two crystal shards on his back that had growth in length. His jaw is now larger, and he wears black shoes with green on the bottom.

Diamondhead is vulnerable to sonic vibrations which can shatter him and sometime make him fall unconscious.

Diamondhead first appeared in And Then There Were 10, where he defeated Vilgax's Gigantic Drone and saved a park.

In Hunted, Diamondhead did some training to master his powers. He was later defeated by Kraab and SixSix before being rescued by Tetrax. He then had a conversation with the latter until he reverted.

In The Big Tick, Ben transform into Diamondhead to his diamond shard projection to damage the Great One's shell, but only for the shards to bound off the shell with no effect.

In Grudge Match, Diamondhead battled Kevin 11 and one of Slix Vigma's robots.

In Vengeance of Vilgax: Part 2, After Chromastone was destroyed by Vilgax, Chromastone reform into Diamondhead, Diamondhead was able overpower Vilgax due to the amount of training Ben has with the Petrosapien before being locked in the Omnitrix. Diamondhead even defeated Vilgax by slamming monstrous crystal prisms down onto the villain.

In Singlehanded, Julie dialed in Diamondhead to fight off Sunder with his hand. Meanwhile, Diamondhead broke a bridge in the Null Void and fell off, forcing him to switch into Goop.

In It Was Them, Diamondhead fought Slamworm. 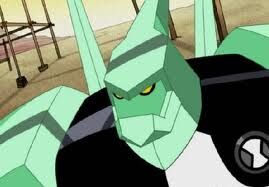 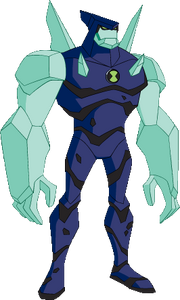 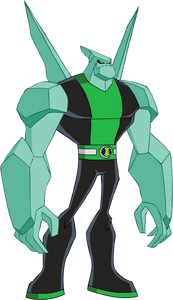 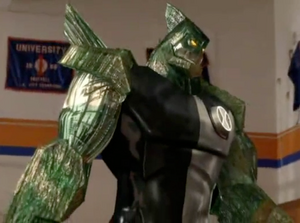 Diamondhead in Race Against Time 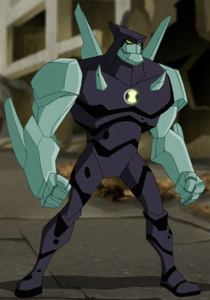 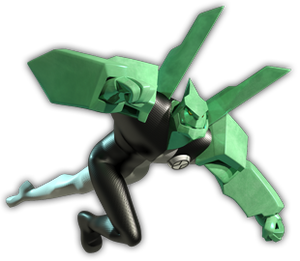 Diamondhead in Destroy All Aliens 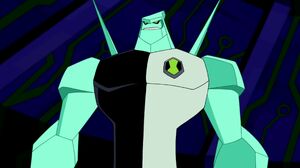