Alien Golem
Note: This is the Reboot version of Diamondhead, For his Prime Counterpart, See Here

Diamondhead is one of Ben Tennyson's Alien Egos from Ben 10 Reboot.

He is voiced by Roger Craig Smith also voices Thomas/Nikolai and Sonic the Hedgehog.

He is slimmer, the spike on his head is now at an angle, he wears a black bodysuit with a pointed yellow line, and the Omnitrix symbol is on his chest. In this incarnation, the Petrosapien species is split into two subspecies. "Petrosapiens" have slimmer bodies and intricate designs that resemble cut crystals found in jewelry; they are shown to be more interested in advancing their technology. The other faction is the war-loving "Subsapiens", which Diamondhead belongs to; they resemble natural, uncut crystals. They are bulkier than Petrosapiens and constantly fight with them, unaware that they are being manipulated by Antrosapiens, another species that lives on Petropia.

He has crystal based powers. 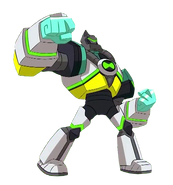 Omni-Kix Diamondhead
Add a photo to this gallery

Retrieved from "https://hero.fandom.com/wiki/Diamondhead_(2016_series)?oldid=2146178"
Community content is available under CC-BY-SA unless otherwise noted.