To find Xerneas and unleash her true power (succeeded)

Diancie is a Rock/Fairy-type Mythical Pokémon from Generation VI.

In Diancie and the Cocoon of Destruction this pokemon was assigned to find Xerneas otherwise the Diamond Domain will not be able to sustain the land. During her travels ot find Xerneas she made friends with Ash and his friends and also become a target to various thieves including a woman that owns a Delphox, a Ninja that owns a Greninja, Team rocket and the Steels that own a Chesnaught which fought each over who should get Diancie and her power to create diamonds. The fighting continues to the underground pool which awoken the Cocoon that holds Yveltal and when the Destruction pokemon was awoken it turned nearly everyone to stone including Ash's Pikachu even though Diancie Mega Evolves to protect her friends with a large diamond. Xerneas arrived to halt Yveltal's rampage and the Destruction Pokemon was forces to flee as Xerneas turned everything that turn to stone back to normal including the thieves that tries to catch Diancie. After the battle Diancie mega evolves and used its diamond creating power to create a heart diamond to restore the kingdom and during the movies credits she said goodbye to her friends and continues to live in the Diamond domain. 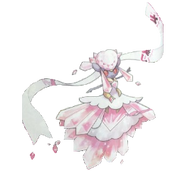