Heroes Wiki
Register
Don't have an account?
Sign In
Advertisement
in: Spoilers, Articles under construction, Female,
and 52 more

Give up her life of crime and become good.

Convince Mr. Wolf and his friends to reform.
Stop Professor Marmalade and save the city (all succeeded).

Diane Foxington, formerly known by her alias of the Crimson Paw, is one of the two deuteragonists (alongside Mr. Snake) of the DreamWorks animated movie, The Bad Guys. She is a fox who is a former master lady thief-turned-Governor of California and Mr. Wolf's love interest.

She is voiced by Zazie Beetz, who also played Domino in Deadpool 2 and Dana in Geostorm.

Diane Foxington has a slender build that is accompanied by her anthropomorphic fox-like appearance. She has two pointy ears, black eyebrows with a dark silver piercing on the left, emerald green irises and a pink snout.

Diane wears a variety of outfits throughout the movie. During her day job as governor she wears a grey suit over a white collared shirt with black tie, thin framed glasses, a diamond necklace, a diamond bracelet on her right wrist, grey dress pants, and black high-heels. During the Golden Dolphin award ceremony, she wears a slim strapless pink dress. During the charity function she wears a strapless blue open-back dress with the skirt going along the sides of her legs, revealing pants in the middle.

As the Crimson Paw, she wears a black jumpsuit with a balaclava covering her face and yellow-orange stripes on the sides.

Initially, Diane was quite contemptuous of the Bad Guys and opposed to the experiment to reform them. However, while showing disapproval to the gang's criminal activities, she gradually takes personal interest in their reformation. When Mr. Wolf vents his point of view of how the world sees him, Diane levels with him, showing him that she knows how he feels and that she genuinely wants him and his friends to have a better life. She used to be a thief who loved every second of her criminal life, but the shame for having conformed to the stereotype of the cunning fox prompted her to abandon her evil ways and become an honest politician to make up for her past. As the movie progresses, Diane becomes one of the gang's biggest supporters, even when Marmalade turns the city against them. She also proves to be selfless; after foiling the corrupt executive's plot, Diane tries to explain that the Bad Guys are not responsible for the theft of the meteorite, even though it'd mean confess that she was the Crimson Paw, and completely destroy her new life, but thankfully, Mr. Wolf and his friends refuse to let her go through with it and surrender to the police.

Diane has exceptional leadership skills while she is the governor of California. As the former elusive thief, the Crimson Paw, she was a far better thief than the Bad Guys, even initially considering them sloppy before warming up to them. She managed to do heists on her own rather than rely on a team, has fighting skills superior to Piranha due to being able to effortlessly defeat the entire police force guarding the prison, owns better equipment than the team, and could have effortlessly stolen the Golden Dolphin on her own before her change of heart whereas the Bad Guys barely managed to do so and then got caught a few moments afterwards. 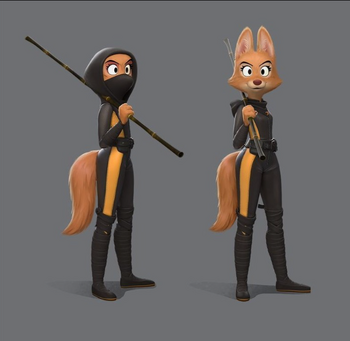 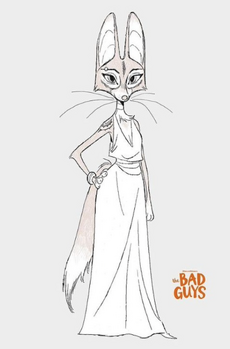 A disguised Mr. Wolf and Governor Foxington contemplate a sculpture.

Diane and Wolf dancing together at the Gala during the "Good Tonight" musical number. 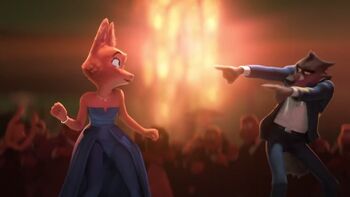 Diane and Mr. Wolf holding hands at the fundraiser Gala.