Start a Wiki
Dick Reynolds is a co-worker of Stan Smith is a recurring character from TV Series "American Dad!".

In "Threat Levels", Dick's wife Sheila got a job in which she earned more money than he did. Dick did not initially mind, but she kept earning more and more, and eventually his genitals disappeared.

He has a son who has a freakishly large hand with which he beats his father in "All About Steve". His son also appears at the Chimdale Mountain Inn in "100 A.D.". He is divorced from his wife Sheila as of "Stan's Night Out" and has a dog named Biscuit, which he seized from Sheila when he was angry that the courts awarded ownership of the dog to her during their divorce. When he returns to steal back Biscuit, he finds Sheila having sex with his barber, Al. In the same episode. his car is stolen by a hooker at a party because he wouldn't pay her.

In "Office Spaceman", he admitted he had liver cancer.

In "One Little Word", he is shown hanging out at Fur Conventions dressed as a car to have sex with people dressed in costumes. He becomes Avery Bullock's "#1" when Stan gives up the job.

In "Virtual In-Stanity", Deputy director Avery Bullock beats Dick in a poker game. Needing to work out some frustration, Dick uses his avatar "Black Dick" to smash a pillar which confuses Stan Smith into thinking there is a race riot. Dick later uses Black Dick to purchase very small condoms and worries they may be too large.

Dick exhibits severe anger issues in relation to girls in "Can I Be Frank (With You)" when Francine tries to crash the CIA Chill House by chasing her off with his gun and shooting the lite beer she brought, pronouncing it "girly."

Dick appears during "He's Got a Kink" in "The Missing Kink".

In "The Boring Identity", Dick joins in the hunt for the real Osama bin Laden who is managing a Doug & Busters restaurant in Florida. On the way, he disturbs Avery Bullock with his cutting of himself to get physched up for the mission.

As revealed in "CIAPOW", he is technologically impaired, as he has difficulty turning on an iPhone and even taking a picture. But this becomes an advantage when the boys attempt to escape from the Thai prison.

Dick is seen at the Smith's party in "Dreaming of a White Porsche Christmas".

In "Gifted Me Liberty", Dick is credited by Stan as having created feline AIDS, although the CIA covered it up by blaming gay cats. He also admits taking dumps in the urinals, referring to them as "inside the park home runs."

Dick is rendered unconscious during a mission in "Standard Deviation" when Bullock's poor planning leads the CIA into a trap against arms smugglers.

Dick was voiced by Stephen Root until "Four Little Words". David Koechner took over the role beginning with "Office Spaceman".

He is voiced by David Koechner, who also played Dennis Lapland in Final Destination 5. 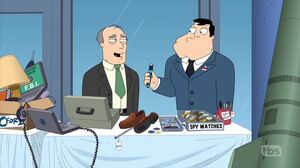 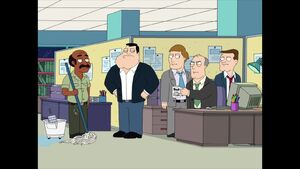 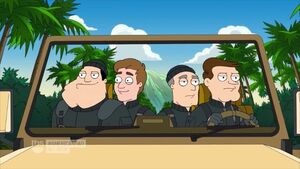 Retrieved from "https://hero.fandom.com/wiki/Dick_Reynolds?oldid=1912929"
Community content is available under CC-BY-SA unless otherwise noted.