Diane "Didi" Pickles is one of the main characters from Rugrats. She is Tommy and Dil's mother, the daughter of Boris and Minka Kropotkin, a part-time schoolteacher and married to Stu. She is also the sister-in law of Drew Pickles and the daughter-in law of Lou and Trixie Pickles and the aunt of Angelica Pickles. It is revealed that she is coulrophobic, just like Chuckie Finster. Didi is also a Russian-Jewish American since having 2 Russian Jewish parents and may also have been born in Russia. Arlene Klasky said that she based the character on herself

She thinks she knows what best for her sons and she tries too much; however, she's unaware that her sons like Reptar and the others.

All Grown Up Season 1 Didi Pickles 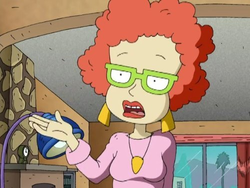 All Grown Up Season 2-5 Didi Pickles
Add a photo to this gallery
Retrieved from "https://hero.fandom.com/wiki/Didi_Pickles?oldid=1756738"
Community content is available under CC-BY-SA unless otherwise noted.