Use a fake Anastasia to get the reward money (formerly).

Dimitri is the deuteragonist and the love interest of the titular protagonist of Don Bluth's animated film, Anastasia.

He is voiced by John Cusack (Jonathan Dokuchitz, singing) who also plays as Jackson Curtis.

He started out as a servant boy and showed them a secret passageway in Anastasia's room.  When the villainious Rasputin sold his soul in exchange and casts a curse on the Romanov family in revenge, she sends Anastasia and her grandmother to a moving train to save their lives.  Ten years later, he is now a con man along with his best friend and partner, Vladimir.  They are in search of an Anastasia look-alike now called "Anya".  Anya leaves the orphanage after she has lost her memory before arriving here.  He first met Anya, who was impressed by resembling the "real" Anastasia and decide to take her with them.  After an encounter with demonic spirits sent by Rasputin, he, Vladimir, Anya and Pooka entered paris to meet Marie, but Marie refuses to see her.  Sophie quizzes her to confirm her identity and Dimitri and Vladimir taught her all the answers as Sophie invites him, Vladimir and Anya to go to the Russian Ballet.  That night, he, Vladimir and Anya went to see the Russian Ballet for the first time and Dimitri suggests that Anya will be reunited with her grandmother after the Ballet is over.  When Marie tells Dimitri that she wants nothing to do with him and have a scheme to trick Anya when she tells Dimitri who he really is, Anya became really upset at him after she found out that Dimitri used her as part of his con to get Marie's money and stormed out, but she was reunited with Marie at last.  The next day, Dimitri decided to go back to Russia and when he realizes that someone is in danger, he arrives to stop Rasputin and saves Anya.  Anya is able to destroy Rasputin and Dimitri and Anya were able to reconcile after Anya discovers the truth as the two head back to Paris by the end of the film.

Dimitri explains to Vlad his plan to audition some girls to impersonate Anastasia.

Dimitri and Vlad have found the perfect "fake" Anastasia—not realizing she is the real deal. 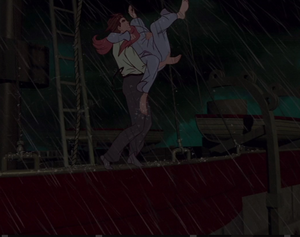 Dimitri saves Anya from sleepwalking of the edge of the ship. 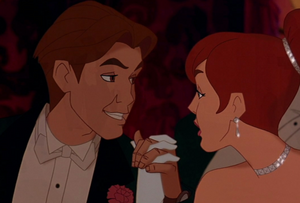 Dimitri realizes that Anya IS Anastasia as he was the boy who helped her escape the terrorists.

Anastasia and Dimitri having a handshake before Dimitri goes to Marie's private balcony so she can be announced.

Anastasia arguing with Dimitri finding out he lied to her from the beginning.

"Not until you listen!"

Dimitri convinces the Empress to see Anya/Anastasia by presenting the music box she gave her granddaughter.

Dimitri accepts Marie's gratitude, but he rejects the reward money.

Dimitri finds a rose in his pocket at the train station. 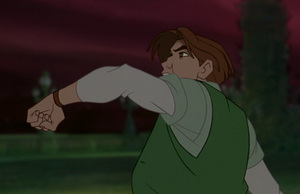 (Rasputin: Say your prayers, Anastasia! NO ONE CAN SAVE YOU!!) "WANNA BET?!"

Dimitri punches Rasputin in the face.

Anastasia and Dimitri reconciling after destroying Rasputin and Anya finally discovering the truth.

Anastasia and Dimitri's kiss.
Add a photo to this gallery

Retrieved from "https://hero.fandom.com/wiki/Dimitri_(Anastasia)?oldid=1774472"
Community content is available under CC-BY-SA unless otherwise noted.