Prince of the Holy Kingdom of Faerghus

House leader of the Blue Lions

Wields a variety of weapons
Magic

Dimitri Alexandre Blaiddyd is the prince of the Holy Kingdom of Faerghus and the house leader of the Blue Lions. He is one of the main protagonists and playable characters in Fire Emblem: Three Houses.

Dimitri was born the crown prince of the Holy Kingdom of Faerghus. Four years prior to the game's events, his father was murdered in an event that came to be known as the Tragedy of Duscur; the Kingdom responded by massacring the people of Duscur, although Dimitri always suspected they had been scapegoated.

Dimitri has pale skin with blond hair and blue eyes. He wears his blue cape, which is the color of his house, on the side of his uniform. After the five-year timeskip, his hair has grown longer and messier. He wears black armor with a blue fur cape, and on all routes other than Crimson Flower has an eyepatch covering his right eye.

Dimitri is a sincere young man who seems like the embodiment of chivalry, but a shade of darkness lies beneath his cheerful demeanor. Despite being a royal, he dislikes formality and pretentious people, preferring his allies to be frank.

Dimitri has a strange sense of humor, which is evident by his fondness for Alois's corny jokes. By his own admission, he finds them humorous precisely because they are terrible. He enjoys combat training, weapon repair, and long rides but dislikes fragile objects and delicate work as he is unable to control his prodigious strength. Despite this, he is agile and became a capable dancer under Edelgard's tutelage. Like Edelgard, he is uncomfortable with scorching heat.

Dimitri suffers from ageusia and survivor's guilt as a result of the slaughter in the Tragedy of Duscur. The former leaves him as the only person able to stomach Flayn's food and the latter causes him to see apparitions of the dead. He is close to Dedue and admits that being able to save someone gave him a reason to live. He also dismisses the Crest system and noblesse oblige as excuses used by the aristocracy to oppress the weak. While disdainful of the status quo, he believes that overthrowing the prevailing social order would be more detrimental; instead preferring to reform society through a war of position, by gaining control of corrupt institutions and purging them from within.

Near the end of his academic year in the Blue Lions route, Dimitri develops an obsessive hatred of Edelgard after discovering she is the Flame Emperor and is determined to kill her personally. The series of tragedies that follow Edelgard's revelation and declaration of war takes a heavy toll on his psyche. By the time he reunites with Byleth, Dimitri has already lost any semblance of happiness and composure he had as a student, becoming brooding, cynical, and ruthless. When reunited with his former classmates, he is brusque and coldly dismisses them as mere tools to exact his revenge. Dimitri's five years of isolation have also exacerbated his survivor's guilt. He openly converses with apparitions of his deceased parents and Glenn, promising to appease them with Edelgard's death. His indignation blinds him to the needs of others and he demonstrates a reckless disregard for his own well-being.

Dimitri is unable to justify killing for one's ideals, and so he rejects the notion of taking up arms for a higher cause as sophistry. Thus, he dehumanizes all killers as monsters and is not above maiming and torturing his captive foes. This disdain extends to himself, as shown by his willingness to be wounded and disfigured by his enemies. However, he is oddly sympathetic to those who are also motivated by revenge, and was willing to die by Fleche's hands as atonement for her brother's death.

Byleth's influence determines Dimitri's fate. In the routes where Byleth does not instruct him, Dimitri will die consumed by vengeance or peacefully in the Crimson Flower route if Dedue is defeated before he transforms into a demonic beast. If he is Byleth's chosen house leader, his obsession with appeasing the dead fades after Rodrigue sacrifices himself to thwart Fleche's assassination attempt. This event restores Dimitri's sanity and he resolves to fight for his beliefs together with his allies, unburdened by the ghosts of his past. Reflecting on his exile, Dimitri would later confess to Byleth that experiencing abject poverty while living in the slums deeply affected him. The plight of the poor inspired him to change Fódlan from the ground up. Though unsure of his fitness to be king, the people's support upon liberating Fhirdiad bolsters his desire to serve them. After the war, Dimitri becomes a benevolent king beloved by the masses for his societal reforms and participatory form of government.

Dimitri comes to Garreg Mach Monastery to learn at the Officer's Academy and meets his stepsister and childhood friend Edelgard, the scion of the Leicester Alliance Claude, and the mercenary Byleth. Byleth can choose to lead either Edelgard's Black Eagles, Dimitri's Blue Lions, or Claude's Golden Deer over the course of the next year. As the year progresses, attacks on the Church of Seiros begin, orchestrated by a masked figure known as the Flame Emperor and an ancient civilization known as "those who slither in the dark". Seeing the depravity of their actions, Dimitri becomes increasingly violent and comes to hold the belief that they orchestrated the Tragedy of Duscur. Eventually, it is revealed that the Flame Emperor is Edelgard, and she takes the throne of Adrestia and declares war on the Church and its allies. Dimitri suffers a total psychotic breakdown and swears revenge on Edelgard. The opening battle results in an Adrestian victory, and Byleth goes missing. The game's four routes diverge at this point based on what house Byleth picked and (if they chose the Black Eagles) whether they betrayed the Church.

In the Crimson Flower route, where Byleth chose the Black Eagles and sided with Edelgard, Dimitri returns to the Kingdom and is crowned its king. He grants asylum to Archbishop Rhea and the Knights of Seiros and spends the next five years battling Adrestia to a stalemate. Eventually, Byleth returns and helps Edelgard defeat Claude and Leicester. Dimitri personally intercepts them at the Tailtean Plains, but is slain in battle. The nature of his final moments depend on Dedue's fate; if Dimitri witnesses Dedue transform into a Demonic Beast, he dies cursing Edelgard's name and wishing her eternal damnation. If Dedue is defeated before he can transform, the mortally wounded Dimitri will lament to his vassal on his inability to protect his loved ones, but Dedue declares that he was able to survive the nine years following the Tragedy of Dusucur because of the prince. Dimitri is able to die peacefully, happy to know that he was able to save someone he cared for after all.

In the game's other three routes, Dimitri is framed by royal mage Cornelia for the murder of his uncle, Rufus. He is imprisoned in the Kingdom, but escapes with the help of Dedue and is presumed dead, allowing Cornelia to turn Faerghus into an Adrestian puppet state. Dimitri then spends the next five years living a solitary existence as a vagabond, gaining a fearsome reputation as a warrior responsible for slaying scores of soldiers, and at some point losing his right eye. During this time, his mental state severly deteriorates, being haunted by visions of his dead loved ones, and obsessing over killing Edelgard to avenge them, no matter the cost.

In the Verdant Wind route, where Byleth chose the Golden Deer, Dimitri appears at Gronder Field, backed by an army he had raised in secret. Driven completely insane by his extended period of isolation, fighting, and obsession to kill Edelgard, Dimitri indiscriminately attacks both Adrestian and Leicester forces, but his army is defeated. Dimitri pursues Edelgard in a mad attempt at revenge, eventually collapsing from exhaustion before being unceremoniously executed by her rearguard covering her retreat. His death is witnessed by Hilda, who sadly relays the news to Byleth and Claude, lamenting that he did not deserve to die in such a manner.

In the Silver Snow route, where Byleth chose the Black Eagles and sided with the Church, Dimitri fights at Gronder Field against both Edelgard and Claude, with all three armies taking heavy casualties. He is listed among those who died but mysteriously appears before Byleth the following evening. Dimitri laments on his inability to avenge his loved ones and prepares to explain to them what he has decided to do next. However, before he can do so, Seteth appears and chides Byleth for sleeping outside; when they turn back, Dimitri has vanished. Seteth is confused by Byleth's claim that someone else was there, and asks if they were dreaming. However, he says that if someone did indeed come to see them, it is likely they were the only person who wanted to see their face and that they may have wished for Byleth's guidance. Many of Dimitri's former classmates mourn his death, though Ferdinand von Aegir believes that Byleth's encounter proves that he is still alive.

In both the Verdant Wind and Silver Snow routes, Dedue survives the battle at Gronder Field and vows to continue Dimitri's quest for vengance, showing up at the Imperial Palace in Enbarr to assist Byelth in killing Edelgard.

In the Azure Moon route, where Byleth chose the Blue Lions, Byleth reunites with Dimitri, and the two begin a campaign against Edelgard. When Dimitri is nearly killed by the sister of an Adrestian general he threatened to torture to death (only for Byleth to grant him a mercy kill), resulting in the death of his last remaining father figure, Lord Rodrigue, he realizes the folly of his vengeful actions and resolves to become an honorable king. Dimitri liberates the Kingdom capital of Fhirdiad, rescues Claude from Adrestian forces, and unsuccessfully attempts to negotiate a peaceful resolution to the war with Edelgard. Left with no alternative, Dimitri besieges the Adrestian capital of Enbarr and kills Edelgard, winning the war. In the aftermath, Dimitri unites Fodlan under his prosperous rule, imposing extensive sociatel reforms with the aid of Byleth, who becomes the new archbishop of the Church of Seiros. 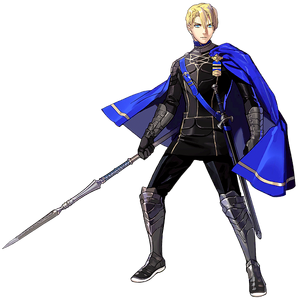 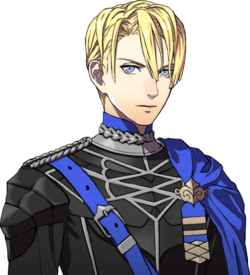 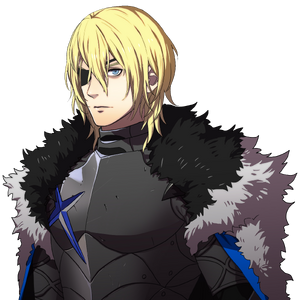 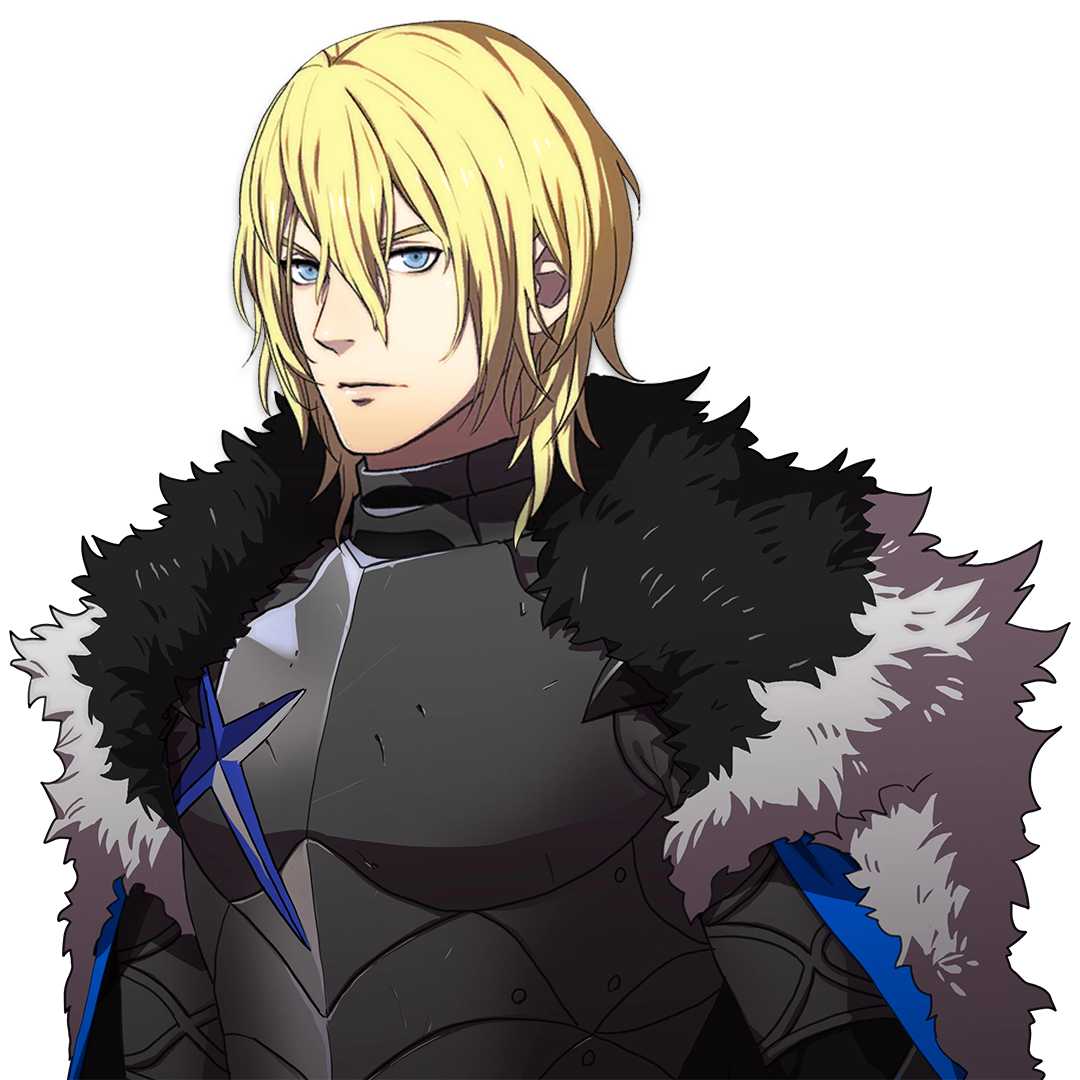 Dimitri without the eyepatch (Crimson Flower only) 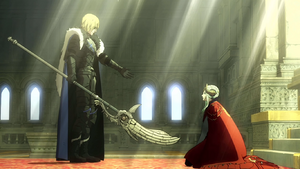 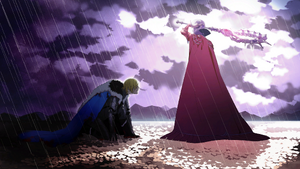 Dimitri in his final moments (Crimson Flower)
Add a photo to this gallery
Retrieved from "https://hero.fandom.com/wiki/Dimitri_Alexandre_Blaiddyd?oldid=1920698"
Community content is available under CC-BY-SA unless otherwise noted.