Din (The Legend of Zelda)

The Legend of Zelda: Oracle of Seasons

Dancer of the traveling troupe

Restore the seasons back to normal (succeeded).

Din is a fair skinned young lady with red hair pulled in a ponytail, with red eyes and gold loose bracelets on her wrists and a matching necklace around her neck. She wears a dark pink outfit with lavender triangles on her sides, ending with a gold triangular buckle that holds the lanyards that are the shape of the flames. She also sports red sandals on her feet.

Din and her performers are first seen meeting Link after he had been summoned to Holodrum by the Triforce. She then invites him to dance with her which he accepts. But after a while, they are met with a dark sky; General Onox appears and reveals to everyone that Din is the descendent of the line of oracles that have the power to change the seasons and summons a whirlwind to blow away everyone present except for Din, lowering the Temple of Seasons, and encases the oracle in a crystal and takes her to his Castle. Without Din, the seasons are disrupted to the extent which destroys the crops and caused much misery across Holodrum. This begins Link's mission to travel around the land to gather the eight Essences of Nature to dispel the barrier that bars Link from entering Onox's Castle, and Link acquires the Rod of Seasons that allow him to switch between seasons in order to get around many obstacles.

When Link collects all eight Essences of Nature, he travels to Onox's Castle to destroy the barrier and enters the castle. After reaching Onox's chamber, he sees Din still trapped in a crystal before Onox appears and starts the battle. Onox uses Din's prison as a shield which would cause Link to take damage and requires the Rod of Seasons to keep it at bay to leave the general vulnerable. Link eventually defeats General Onox's dragon form and Din is freed from imprisonment and the seasons have returned to the natural order, but the destruction Onox caused lit the Flame of Destruction. In the normal game save, Din can be seen dancing in Horon Village. In the Linked Game however, she and Nayru teleport Link to the Room of Rites where the fight with Twinrova and Ganon would ensue, and Link would emerge victorious.

Din reappears alongside Farore and Nayru as the three women inside the Happy Hearth Inn who are looking for a place to stay in Hyrule Castle Town. If she is given a house to live in, she will grant Link Din's Charm which will temporarily boost his attack power.

Din appears in Super Smash Bros. Ultimate as a advanced-ranked support spirit who increases the user's resistance on lava-floor. Her spirit battle is against two Zelda who favors side-specials on the battlefield form of Bridge of Eldin with lava floor. 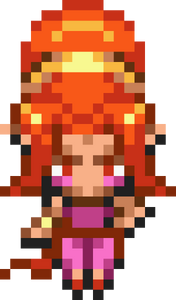