Start a Wiki
Division 13 is a rebellious superhero group in the Dark Horse Universe.

3 escapees from a government facility were people were experimented upon, Division 13 has chosen to use their mutations to help others who have suffered the same fate and have been turned superhuman as a result.

The exact history of the members of Division 13 remain a mysteries. What is known is that they were ones normal people who were experimented on in the secret government facility in Cinnabar Flats. Three mutants were freed by a man named Frank Lamb and together they formed a team with the intent of freeing the other mutants. 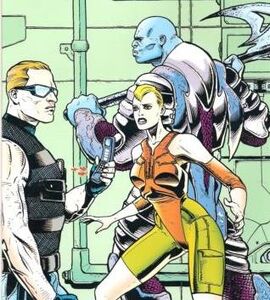 Add a photo to this gallery
Retrieved from "https://hero.fandom.com/wiki/Division_13?oldid=1793315"
Community content is available under CC-BY-SA unless otherwise noted.