Dixie (The Fox and the Hound)

The Fox and the Hound 2

Member of the "Singin' Strays"

To sing in Cash's group (succeeded)

Arrogant
False Antagonist
Dixie is the main antagonist-turned-supporting protagonist in the 2006 Disney film,The Fox and the Hound 2. She is a member of the "Singin' Strays".

She is voiced by Reba McEntire, who also voices Etta from The Land Before Time XIV: Journey of the Brave.

Dixie is a slender Saluki with red hair, beige fur and a tan underbelly. She also has brown-coloured eyes.

She also has a black collar, black nose and a black bow.

Dixie is kind and beautiful, but she can also get into an argument with Cash after he fires her.

She also appears to be arrogant and bossy, but she is also nice to Tod, and tells him about getting his best friend, Copper back.

She also felt sorry for Copper, and tells him that Tod just wanted to get him back.

During the climax of the film, she became nice to Cash again. 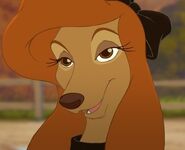