Doctor Light (real name Kimiyo Hoshi) is a fictional character and superheroine in the DC Comics and Universe and member of the Justice League.

She is an astronomer who received powers from the Monitor, which allowed her to manipulate light via vega energy. Though not the villainous Arthur Light (also known as Doctor Light), Kimiyo has crossed paths with Light, and has fought him. In Prime Earth, Kimiyo was married to Arthur Light and had children with him, but she later divorced him once he became a villain. She is a member of the Justice League, and has been a member of the Outsiders, Doom Patrol, Justice League Europe, and Justice League Task Force.

She was created by Marv Wolfman and George Pérez, and first appeared in Crisis on Infinite Earths #4 on July of 1985.

Dr. Kimiyo Hoshi was an astronomer and became a hero during the Crisis when the all-powerful Monitor zapped Dr. Hoshi with otherworldly energy. Her new power allowed her to control and absorb a variation of different light energy. After the Crisis Hoshi dawned a costume and joined the Justice League calling herself Doctor Light and even became the team leader of the European branch. Doctor Light was arrogant and left many of her teammates with a cold feeling about her.

She possessed most of the same powers as the original villainous Doctor Light, but she used her powers to establish herself as a hero in her own headstrong way. Doctor Light was also a single mother with two young children and was only semi-active in the superhero business, yet she served with both the Outsiders and the Doom Patrol. Although she is no longer a member of either team, Doctor Light remains active as a part-time adventurer.

On Prime Earth, Kimiyo was married to Arthur Light, and had children with him before he became a supervillain. Afterward, Kimiyo decided to become a superheroine named Doctor Light, and joined the Justice League.

Doctor Light appeared as Kimiyo Hoshi in the animated film Justice League: Gods and Monsters. She does not have her light powers but is a scientist involved in the Fair Play Program that was meant to stop the Justice League in case they were a global threat. After some scientists were mysteriously murdered, Dr Hoshi met with the other members but was ambushed and killed by the Metal Men.

She was voiced by Lauren Tom, who also voiced the character in Justice League, and also voiced Kuki Sanban in Codename Kids Next Door, Jinx and Gizmo in Teen Titans and Teen Titans Go!, Jessica in Scooby-Doo! Camp Scare, Amy Wong in Futurama.

Doctor Light appears in the web series DC Super Hero Girls. She is seen as a background student at Super Hero High.

Doctor Light appeared in the second season of The Flash, a tv show part of the CW's Arrowverse, and was portrayed by Malese Jow in season two, and Emmie Nagata in season six. In the series, she was a meta-human assassin who worked for Black Hole, who assigned her to eliminate anyone who knew of the existence of meta-humans.

Doctor Light appears in Justice League, having a non-speaking role in the episode "Party Animal". 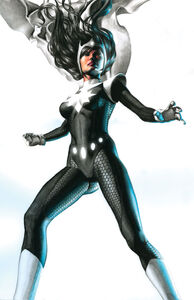 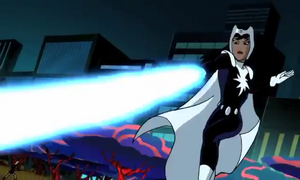