To help protect the Xiaolin Temple and the world from threats.

Dojo Kanojo Cho was the guardian dragon of the Xiaolin Temple and keeper of the Ancient Scroll of the Shen Gong Wu. He was also the monks' primary method of transportation. Whenever Dojo was unable to fly due to strenuous circumstances, the monks resorted to using Shen Gong Wu like the Silver Manta Ray or the Crouching Cougar. Dojo possessed the ability to change his size from the size of a lizard to a 40-foot dragon. He was also a known shape-shifter.

Dojo was an ancient dragon and much of his past and life remains unknown. According to caculations he was probably born in the year 504 ad. The little bit of his history revealed is that many years ago, he served as the companion and best friend to the Xiaolin Dragon, Grand Master Dashi. At some unspecific point after Wuya's defeat, Dojo helped Dashi hide the countless Shen Gong Wu all across the globe.

He served as the Guardian of the Xiaolin Temple, sharing a close bond with Master Fung and Omi. When Wuya was released from her imprisonment and the Shen Gong Wu reactivated, Dojo served as as a radar and transportation for the Xiaolin Warriors in their endless scavenger hunt for the mystical objects, becoming an essential member of the search.

It also appeared that every 1500 years, Dojo was overcome by a craving for consuming Shen Gong Wu and anything in his way. Dojo's companions seemed to overcome this by locking him into a structure he was unable to escape from on his own due to the fact that if he did get out, he would evidently force the world into 962 years of darkness (Master Fung said using the expression "1000 years of darkness" sounded more ominous), consumed by his greed. The first time he got out, he destroyed Atlantis. 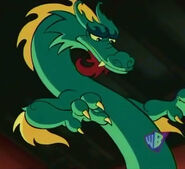 Dojo in his true form 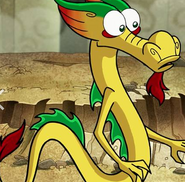 Retrieved from "https://hero.fandom.com/wiki/Dojo_Kanojo_Cho?oldid=1831057"
Community content is available under CC-BY-SA unless otherwise noted.