One of Bonnie's toys

Being played with by Bonnie.

When Dolly learns Woody's name, she asks if he's gonna "stick with that". She has shown to be sassy, and apparently the brains of of Bonnie's toys as she was the only one not dense enough to misread "Andy" when Woody holds his boot upside down.

She is voiced by Bonnie Hunt who voiced other pixar characters like Rosie and Sally Carerra.

Dolly is first seen being played with by Bonnie as "The Scary Witch". When Woody arrives at Bonnie's house, Dolly asks him his name, and when he gives it, asks him "are you going to stick with that?". Woody then shows her Andy's name on the bottom of his boot, and Dolly is the only one of Bonnie's toys to read it correctly.

In one of the scenes shown during the credits of the film, Dolly shows Bonnie's other toys and Andy's toys (who were donated to Bonnie by Andy before he left for college) pictures Bonnie has drawn of them, which notably makes Chuckles smile for the first time in a long time. 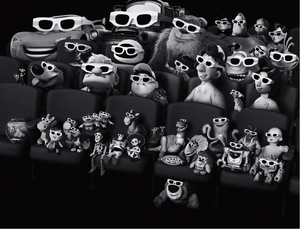 Dolly and her friends watch a movie with other Pixar characters

Dolly and her friends in a poster for Toy Story 3