Gear soldier and corporal in the Coalition of Ordered Governments army

Spending time with Marcus and his friends.

Corporal Dominic "Dom" Santiago is the deuteragonist of the Gears of War franchise and was a Gear soldier in the Coalition of Ordered Governments' army. Dom is the Hero of Timgad, and a veteran of the Pendulum Wars, and later fought in the Locust War alongside his friends.

He was voiced by Carlos Ferro, who also voiced Miran Trescu in the same series.

Dom was the younger brother of Carlos Santiago and son of Eduardo Santiago and Eva Santiago. Born in a Pre E-Day Sera, he grew up listening to his father's war stories and going to school with Carlos and best friend Marcus Fenix. Dom later joined the army as a commando and took part in Operation Leveler. On Emergence Day, Dom lost both his children, and his wife Maria went into a deep depression and she later disappeared. Years later Dom freed his friend Marcus from Jacinto Maximum Security Prison and recruited him into Delta Squad.

His battlefield intensity is rivaled only by his loyalty to Marcus. Dom's friendly and outgoing nature lets him form relationships with factions throughout Sera, including the Stranded. He's always quick with a joke, but Dom's amiability masks an inner conflict that makes the war against the Locust far more personal. After being forced to euthanize his wife during Operation: Hollow Storm, Dom became more withdrawn from his squadmates, but continued to fight hard alongside them during the Stranded Insurgency and Lambent Pandemic.

When the COG collapsed, Dom joined the rest of Delta aboard the CNV Sovereign, serving as a member of a rapid response force that defended former COG communities. Dom was killed during the Mission to Mercy, sacrificing his life to destroy a fuel tank that wiped out a large Locust and Lambent force that had trapped Delta-One.

Dominic "Dom" Santiago was born on Tyrus, 21 B.E. to Eduaro and Eva Santiago during the sixtieth year of the Pendulum Wars, and is the younger brother to Carlos. The family lived in the city of Ephyra, and attended Olafson Intermediate School by the time was eight years old. He met and befriended Marcus with Carols, and the group became close friends. When his mother asked how Marcus' parents were, Dom stated that they were nice, but distant than Eva and Eduaro. After Marcus' mother disappeared, he stated that he believed his mother was never coming back, and that his father wasn't telling him everything. Marcus would spend more time with Dom and his family, and Dom and Carols considered Marcus another brother.

Around this time, Dom became interested his neighbor Maria Flores, and five years later, the two began a romantic relationship and accidently got her pregnant. The two decided to get married, and told their parents despite being in school, but Dom's father accepted this and supported him. Wanting to support his wife and upcoming child, Dom decided to drop out of school and joined the army after his brother and Marcus joined previously, and had the two be his best men. At the beginning of Frost, Maria gave birth to a boy, and they named him Benedicto, and Dom enlisted by Thaw.

Joining the army, Dom fought in several battles, becoming an experienced soldier, and Maria became pregnant again. Dom volunteered for commando training, and was assigned to the 26th Royal Tyran Infantry Special Tactics Group, and was taught survival techniques by Bernadette Mataki. Dom later passed his commando training, and was gifted with a command knife, later going on leave for fifteen days. Later on, Dom participated in Operation Leveler, helping to take over Aspho Point. Afterward, Dom reunited with Marcus, who saved his life from a Khimera, and learned that Carlos had been killed in the battle. For his actions, Dom was awarded the Embry Star, and returned home with his and children, and they lived in an apartment four a few years until they got enough money to rent a house in Ephrya.

After the UIR surrendered and the Pendulum Wars was over, Maria sent the kids to her mother's so Dom and her could have a day to themselves. The day they did so was Emergence Day, as the Locust Horde attacked, killing Maria's parents, and Dom and Maria's children. Both Dom and Maria were able to evacuate to their house while the Locust attacked the city, but Maria was filled with depression and grief due to lost of her children. A year after Emergence Day, Dom continued to fight against the Locust, and four years later, Maria left Jacinto and vanished. Due to losing his parents, children and his wife vanishing, Dom holds a great amount of hatred for the Locust, due to them making it personal.

After Marcus was sent to trail for disobeying orders, Dom's testimony saved his friend from execution. Despite this, however, Marcus was still sent to the Jacinto Maximum Security Prison, and Dom lost the trust of many people due to him siding with Marcus. This also caused his superiors not to give him a promotion, believing that he was loyal to Marcus than the COG, despite them respecting his actions. 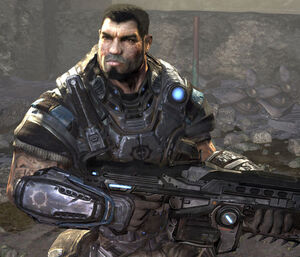 Dom during Operation: Hollow Storm in Gears of War 2. 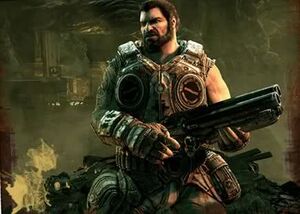 Dom, now bearded, as he appears in Gears of War 3.
Add a photo to this gallery

Retrieved from "https://hero.fandom.com/wiki/Dominic_Santiago?oldid=1843789"
Community content is available under CC-BY-SA unless otherwise noted.