Assist Cable and completing her missions.

Domino, aka Neena Thurman, is a character from Marvel Comics. She is a mutant and mercenary who possesses the ability to manipulate probability in her favor, giving the effect of incredible luck.

Bred to be the ultimate weapon by a top-secret government facility, Domino's mutant ability was actually seen as a flaw. Fearing they'd kill her as a result, Domino's birth mother whisked her away to a church in Chicago, where she'd continue to live until becoming a mercenary in her adult years.

Now working for the NSA, Domino fell in love with (and married) Dr. Milo Thurman, a scientist she was assigned to protect. Their union didn't last long; they were separated by a raid that led Milo to assume his wife had been killed. Domino then met time-traveling mutant Cable when she was recruited to his strike team Six Pack, and the two quickly became an item. As with her estranged husband, however, Domino found herself pulled away from her lover yet again during a mission. They've since reconnected many times, sharing an on-off relationship over the years. 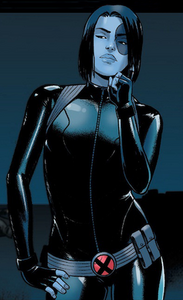 Retrieved from "https://hero.fandom.com/wiki/Domino_(Marvel)?oldid=2191252"
Community content is available under CC-BY-SA unless otherwise noted.