Relaxing in his rocking chair.

spending time with his daughter.

To form a romantic relationship with Gloria (succeeded).

To make enough money from his job to pay the rent (succeeds sometimes, fails most of the time).

Don Ramón/Mr. Raymond (Seu Madruga, Mr. Morning) is the tritagonist of the TV series El Chavo del Ocho. He is portrayed by the late Ramón Valdés.

He lives in apartment No. 72, with his daughter, Chilindrina. He has a debt of 14 months of rent to the owner of the vicinity, Señor Barriga, and he always makes excuses to not pay him the rent. Sometimes, he loses patience with children and punches Chavo and pinches Quico. In this case, when he is caught by Doña Florinda, she gives him a slap in the face. Sometimes, he is accused by her, even without having done anything to the boy.

His neighbor, Doña Clotilde, known as "Witch of 71", is in love with him and tries to please him, often making cakes and snacks for him. Normally, the goodies are targeted and stolen by the children of the vicinity.

Although in most episodes Ramón makes excuses for not paying rent, he has paid the rent in certain episodes.

He has a special affection towards Chavo: even if he has beaten and punished him more than once, they are like father and son and he helps the boy whenever he can, such as by giving him food or offering him shelter; starting, the boy also reciprocates the gesture of the old man but anyway, he just beats up Chavo when he makes the man get angry by futile and ignorant reasons, or when he denounces him to Florinda and Barriga (unintentionally). 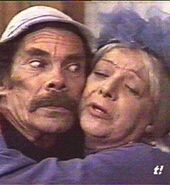 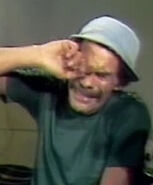