Invent a signals network that will allow people to not discriminate against others.
Assistthe FOX Unit
Create the AI for the Patriots (both succeeded)

Donald Anderson, also known by his codename Mr. Sigint, or simply Sigint, is a supporting character from the Metal Gear series.

Donald Anderson was born on November 11, 1939 to unnamed parents in Nashville, Tennessee, and was either the younger or older brother to an unnamed sister. During his youth, he became familiar with technology and weaponry, and was scouted by Major David Oh, also known as "Zero", to become a member of the Central Intelligence Agency due his abilities. Anderson agreed to take the opportunity, considering that it was hard for him to find a job due to racial discrimination at the time. Donald's recruitment into the agency was controversial, however, and Zero often dealt with countless complaints from his peers.

Despite these troubles, Anderson would prove himself to be a valuable asset to the agency, as developed advanced technology that was useful. He would create the Raikov mask for the CIA for a mission for an agent to infiltrate the Soviet Union, but it was aborted and Zero told Anderson to throw the mask away. Donald decided to keep the mask, considering it an ingenious design since it could blink, but didn't understand why one would want lips to move on it.

Anderson was recruited into FOX, a sub-unit of the CIA that was tasked with handling infiltration missions, and stopping the Soviet Union and The Boss. He was given the codename "Mr. Sigint", and would provide Zero and Naked Snake with notes regarding with the opponent's tech and weaponry. During "Operation Snake Eater", Sigint would supply Naked Snake with intel from the Cobra Unit and provided useful tactics for Snake to use on the field. Snake succeeded in his mission, but would learn that his mentor, The Boss, never betrayed her country but would go down in history as a traitor. Anderson would attend Snake's ceremony and congratulated his ally for his success, but was concerned by Snake left without saying a word.

During the mid-1960s, Anderson joined ARPA and developed ARPA.net, and was involved in two projects that were working on improving soldiers for combat. Sigint was contacted by Snake when he escaped imprisonment, and Anderson wanted him that he would have to clear his and Para-Medic's name since they were charged with treason alongside Zero. He later told him about a Green Beret team that he lost contact with, and Snake managed to rescue its last member, Roy Campbell. After Snake cleared his, Para-Medic's, and Zero's name for the San Hieronymo incident, Donald reunited with his allies.

Around the 1970s, Anderson was recruited by Zero to form the Patriots alongside Big Boss, Revolver Ocelot and EVA, and used ARPA.net to get some virtual control. After the Peace Walker Incident, Donald was inspired to create an artificial intelligence to carry on Zero's will and act as a guide for humanity, with specific rules from acting on it's own. By 1974, Donald was given leadership of the organization when Zero was injured by his former subordinate, Skull Face. Anderson would lose control over the agency, now known as "Cipher" by Skull Face, but regained leadership when Skull Face was defeated by Big Boss's body double, Venom Snake. His work with creating AI lead to unintentional consequences, such as the S3 Plan and the war economy. In addition, since Anderson allowed the AI network to learn on it's own, they would no obey the will of Zero.

By the 2000s, ARPA would change it's name to DARPA, and Anderson would become it's chief in 2002 after serving it for three decades. He was later bribed by Kenneth Baker to fund Metal Gear REX, a prototype bipedal tank that was made for the military to fight against enemies. Anderson received funding the Pentagon's black budget, and worked with ArmsTech to create the tank. Before or during the 2000s, Anderson would become married and befriended Jim Houseman.

In 2005, Anderson and Baker arrived at Shadow Moses to see a conducted test on Metal Gear REX, and deliver the data from the test to the Secretary of Defense. The two were then taken hostage by FOXHOUND, which was led under Big Boss's clone/"son", Liquid Snake, and was interrogated by Psycho Mantis and Ocelot. Due to Anderson having cranial implants, Mantis was unable to read his mind, and Donald refused to get the codes to the group. He was tortured and killed by Ocelot, as Anderson knew of the latter's identity and true motivations. Ocelot then covered the death as a "botched" interrogation, and Liquid used Octopus to try to trick Solid Snake to reveal another way to activate Metal Gear REX. Solid Snake would encounter Donald's corpse when he was being held by Ocelot, and learned of the switch when Vulcan Raven revealed this. 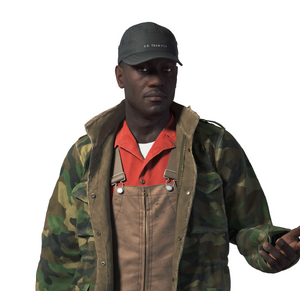 Donald Anderson in the MGS3 pachislot.