Inventor
Donatello is one of the main characters of Rise of the Teenage Mutant Ninja Turtles.

He is voiced by Josh Brener, who also voice Steel in the 2016 film Max Steel, Dylan from 101 Dalmatian Street, and Twig from The Mighty Ones.

Much like his previous incarnations, Donnie is the brains of the Mad Dogs, as well as fairly neurotic. He is prone to going over the top with his plans, such as desiring uranium for his machines. Donnie can also be passive-aggressive; instead of confronting his brothers about their bad habits, he made "gifts" that would force his brothers to give up their habits.

Unlike his previous incarnations, Donnie is more reckless as he is stated to be an adrenaline junkie. He is very sarcastic; he tends to insult his brothers, especially when he's not in the mood for their company. Donnie is very cocky and loves to show off and is easily irritated when his brothers don’t listen and/or appreciate his intelligence.

Sometimes he relies on his tech more than his ninja training which applies to his brothers as well. Donnie is also crazy and would most likely snap when he doesn’t get his way. On top of that, he is also obsessive and stubborn when he is determined to get what he wants. Donnie can also be irresponsible, such as putting blame on his mistakes or denying the responsibility of his actions. However, Donnie is shown to have a bit of a soft spot towards his brothers, especially Michelangelo.

Despite himself believing to be an emotionless bad boy, Donnie is actually quite a softie and gets emotional quickly. He longs for validation and praise, especially from adults. In "Turtle-dega Nights: The Ballad of Rat Man" Donnie was beyond excited to spend some time with Splinter in a father-son car competition. However Splinter had lied about his intent, which was to enter the Turtle Tank in a Yōkaidemolition derby, and Donnie was genuinely upset and hurt by this deception.

Donnie is musically-gifted as he can sing and can play musical instruments such as the guitar and the saxophone. He also has a passion for dancing as seen with his password being "Bootyyyshaker9000" as seen in "Stuck on You", and for electronic dance music as seen in "Smart Lair" and "Al Be Back". Later he used his former password Bootyyyshaker9000 as a username in "The Purple Game".

In "Donnie vs. Witch Town", Donnie is shown to be quite skeptical when it comes to magic. He does everything he can to prove to the witches that science is superior to magic.

Donatello has jade green skin with purple pixel designs painted on his upper arms and thighs, a light brown plastron and dark brown carapace. He also has a large head (to indicate his intelligence), thick black eyebrows, black eyes, three fingers on each hand and two toes on each foot.

Donnie wears a purple mask that pulls over the top of his head (with short square-cut mask tails), silver convertible goggles with a red and blue lens and a purple battle shell that fits over his real shell. He also wears purple fingerless gloves with matching socks on his feet, a silver tech-gauntlet with a blue touchscreen, purple elbow and knee pads, and a purple belt with color-matching pouches and Turtle emblem.

Donnie began life as a juvenile turtle in Baron Draxum's laboratory. Wishing to create a mutant army with formidable combat capabilities, Draxum used Lou Jitsu's DNA paired with his ooze to turn Donnie from an ordinary turtle into a mutant. He and his brothers were then stolen from Draxum's laboratory by Lou Jitsu promptly after their mutation and Donnie went on to be raised in the sewers of New York City alongside his brothers by Splinter. Eventually, Donnie and his brothers met a human girl named April O'Neil and forged a strong bond with her through the years. 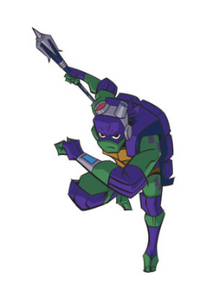 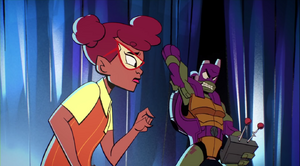