Stop the world from coming to an end (succeeded).

Save everyone close to him.

Donnie Darko is the titular protagonist of the 2001 film, Donnie Darko.

He was portrayed by Jake Gyllenhaal.

Donnie Darko is a youngster in Middlesex, Virginia, who has been under psychological attention and medication. He lives with his parents and two sisters, to whom all he is actually caring nonetheless. Donnie also attends a private school, where he belongs to a group of friends.

On October 2, 1988, in the middle of the night Donnie finds in his mind a strange individual, Frank , who is wearing a rabbit costume and a strange mask, foretelling an imminent final even that will occur within a month. At this point, Donnie is within the tangent universe and the bunny is revealing that this universe will ultimately cease to exist by the closing of the month.

Donnie sleepwalks, following the rabbit man which leads him to spending the night sleeping at a nearby golf course. In the morning, he finds that such trip saved his life as a falling plane-engine had crushed his own bedroom.

During the ensuing days the imaginary Frank keeps guiding Donnie Darko, for a series of apparently unrelated accomplishments; Donnie floods his school, burns the house of an annoying motivational speaker, and particularly he gets infatuated with a girl, Gretchen. All of these events were guided by the man in the bunny suit.

Also, Donnie Darko begins seeing uncanny effects over the real world, such as some kind of temporal vectors which anticipate the immediate future actions of each person (the liquird tubes). With this, Donnie discovers that the destiny of everything in this world would be following some master plan, and he would be manipulated by some time-traveling forces.

Studying the case with the help of his Physics teacher, Donnie realizes that he has been living within some sort of God's channel, actually witnessing future events of real life unlike anybody else, so being able to anticipate and modify the future events of the real world at will.

Happening upon certain events, such as his girlfriend being slain by a speeding car driven by the present version of the rabbit man, Frank, and Donnie shooting him in the eye, etc. (events which have been foretold by the dead, future rabbit that is constantly in contact with Donnie) Donnie Dark finally realizes that he must meet his destiny with "the artifact" (ultimately, staying in his room and dying by the fallen engine).

Avoiding the police, Donnie Darko then realizes, that soon everything will be over. An unnatural cloud forms over his home, twisting the time and space of the reality. The engine of another plane then falls over it, and again it's the original October 2 day; Donnie finds himself lying again on his own bed. He had traveled back in time to that moment.

However, Donnie Darko then decides to remain on his bedroom, for perishing this time in the crash, and so saving all the people who he loved and whose lives had been so affected by his messianic actions during the last days. 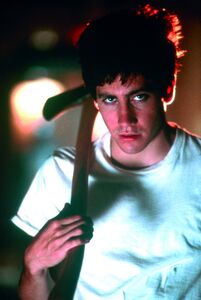 Add a photo to this gallery
Retrieved from "https://hero.fandom.com/wiki/Donnie_Darko?oldid=1686119"
Community content is available under CC-BY-SA unless otherwise noted.