Donald Michael "Donnie" Thornberry is a fictional character of The Wild Thornberrys. He usually communicates using gibberish, but also has a history of using American Sign Language He is voiced by Michael "Flea" Balzary of the Red Hot Chili Peppers.

Donnie is a feral boy who (as revealed in the 2001 4-part TV movie, "The Wild Thornberrys: The Origin of Donnie") was raised by orangutans in Borneo. His real parents, Michael and Lisa, were naturalists who loved and protected animals with their hearts. One night, it is revealed, a mother and son orangutan were on the verge of being captured and sold by. Donnie's parents managed to save them but are killed for interfering, much to the horror of the orangutan mother and the local villagers who came to know about their deaths. Out of gratitude and love, the mother orangutan took Donnie and raised him as a son. One day, however, she comes across the Thornberrys and decides to give Donnie to them so he can have a human family. She watches tearfully along with her son as he is welcomed into their family as their own. Before the Thornberrys officially adopt him, it is revealed that Nigel and Marianne knew his parents as they had met them while Donnie's parents were on their honeymoon. He usually wears a pair of leopard-spotted shorts (similar to Tarzan's leopardskin loincloth) and he loves to eat all types of bugs. He babbles wildly and makes animal-sounds (but nothing Eliza can understand), occasionally spouting bits of English or exhibiting intermittent signs of sophistication. Donnie is 4, turning 5 in "The Origin of Donnie", and it is presumed he does not know what happened to his parents. It is revealed that he was able to pick up sign language from watching his parents teaching it to orangutans. We only see him sign one word (family), and it is unclear how much he knows. Nevertheless, this proves Donnie's intelligence - something which we see further evidence of in a drawing he does of his parents alongside the orangutan family that raised him. 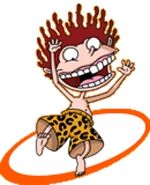 Retrieved from "https://hero.fandom.com/wiki/Donnie_Thornberry?oldid=1721182"
Community content is available under CC-BY-SA unless otherwise noted.