The Doom Marine
B.J. Blazkowicz
The Doom Slayer
The Hell Walker
The Destroyer
Scourge of Hell
The Unchained Predator
The Beast
The Slayer

modifying his armor and weapons

Kill all demons and end Davoth's reign of destruction once and for all. (ultimately succeeded)

Doomguy, referred to as Doom Slayer since the 2016 reboot, is the titular main protagonist of the Doom video game franchise. He is a mysterious and somewhat ambiguous character that not much is known about. He is a space marine that has a sworn hatred of demons. Despite this, in Doom Eternal: The Ancient Gods, it's mentioned that Doomguy was possibly conceived by Davoth, better known as the Dark Lord.

In the 2005 film, he was portrayed by Karl Urban, who also portrayed Skurge in Thor: Ragnarok, Judge Dredd in Dredd, and Billy Butcher in The Boys. In Doom: Annihilation, he was gender swapped and was protrayed by Amy Manson, and in Doom: Eternal, he was voiced by Matthew Waterson. In Japanese dub he is voiced by Keisuke Ueda who also voices Mickey Mouse in Disney series and Razputin Aquato in Psychonauts video game series.

Not too much is known about Doomguy's history before the events of the series. Originally. id Software stated their games shared the same continuity, and that Doomguy was the son of Commander Keen, who is the grandson of William "B.J." Blazkowicz, which would effectively make Doomguy "William "B.J." Blazkowicz III". The spin-off game Doom II RPG gives him the name Stan Blazkowicz. However, not only is Doom II RPG most likely non-canon, but it's been theorized that Doom Guy as he appears in that game is a different character.

What is known, is that Doomguy was an enlisted man in the United Aerospace Corporation's marine corps. We also know that he used to own a pet rabbit named Daisy. Along with this, it is shown that Doomguy actually had a wife and a unidentified child, as shown in a family photo that can be found in Doom Eternal. Before the start of his demon-slaying career he was sent to Mars as a punishment for punching his superior officer, who ordered Doomguy to fire upon innocent civilians. This shows that he will go as far as committing insubordination to protect innocent people.

While on Mars, a catastrophic failure occurred when scientists tried to master interdimensional travel so they could open portals between Phobos and Deimos. The failure caused Deimos to disappear, and a portal to Hell opened, causing a hellish invasion. With Doomguy's unit being the only battle-ready unit on Mars, they were sent to Phobos for damage control. Doomguy was left alone to guard the exterior with only a pistol, while his buddies went to confront the situation.

All of his comrades ended up either dead or transformed into Zombiemen. Doomguy went to confront the demons, grabbing more weapons along the way, like the shotgun and plasma rifle, as well as one of the most iconic weapons in his arsenal: the BFG 9000. After killing the Barons of Hell on Phobos, he teleports off of the moon and arrives at a lost Deimos. He later killed the Cyberdemon using a rocket launcher. It was there that he learned that Deimos was now floating above Hell itself. He went to the nightmarish landscape, and slaughtered as many demons as he could, including the leader of the invasion, the Spider Mastermind. After killing it, Doomguy entered a portal and returned to Earth.

When he came back, however, everything was in chaos. The demons used the same portal and used it to invade Earth. killing billions of humans, as well as Doomguy's pet rabbit, Daisy. This is where Thy Flesh Consumed, the 4th episode included in Ultimate DOOM (which was basically an updated version of the original DOOM), begins. Serving as a prologue to DOOM 2: Hell on Earth, Thy Flesh Consumed tells the tale of Doomguy, as he fights to stop the demons from killing the remaining humans, and he once again kills the Spider Mastermind. This is where he learned that not only did the demons use the same portal he used, but they killed his pet rabbit, Daisy. Filled with anger, grief, and a thirst for vengeance, Doomguy went out to bring the pain to the demons, that caused him this tragedy.

DOOM 2: Hell on Earth picks up right where the original game left off. Ever since they left Hell, the demons have caused destruction, chaos, and mayhem on Earth, killing billions of innocent civilians. The only way for the survivors to evacuate Earth is to head to the last starport, but it was occupied by the demons.

Luckily, Doomguy went there and cleared out the starport, finishing off demons like Pain Elementals and Revenants, allowing the humans to evacuate the planet. After leaving, the humans helped Doomguy by pinpointing the origin of the invasion: his home town! He went to the very place that built him into the man he became, slaying all demonic invaders there.

He later came back to Hell, killing the Icon of Sin, thus stopping the demonic invasion in its tracks, allowing the remaining humans to come back whenever they are ready to rebuild.

Mankind has returned to Earth and begun to rebuild, but the Doomguy was not feeling at peace. After traveling through Hell and back three times and counting, he suffered from nightmares and mental trauma, something the UAC psychologists could fully treat.

After several years, the Doomguy is pulled back into action: one of the UAC's abandoned research facilities, which had been thought sterilized of demonic presence by use of heavy radiation, is now sending an early warning transmission about another growing demonic invasion. Doomguy suits up, ready to hunt the new source of the demons.

After another long, hard battle with the newly empowered demons, Doomguy stands victorious over the "Mother Demon" and her resurrected army. Doomguy swears that he will remain in Hell for all eternity, ready to do battle and ensure that the demons will never again rise to power and threaten mankind.

Not much is know about Doomguy's feelings, but it is known that he loved his pet rabbit Daisy, as he was infuriated when the demons killed her, which fueled his already-deep hatred towards demons. It is also known that he wants to protect innocent people, as seen by the fact he punched his superior officer for ordering Doomguy to fire upon innocent civilians. 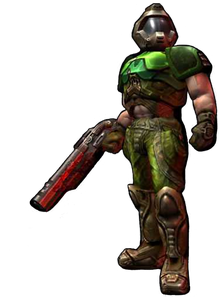 Doomguy in his classic armour.

The Doomguy in Doom 3. 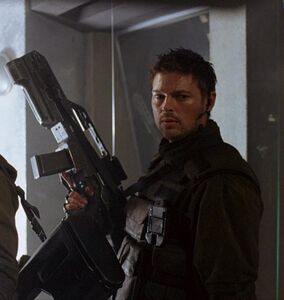 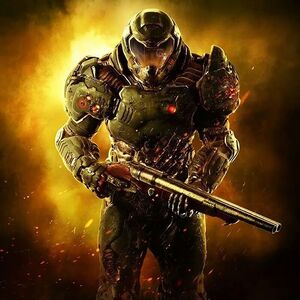 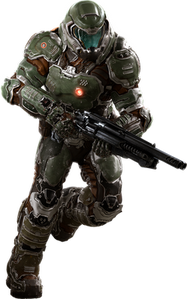 Doomguy in his modern armour. 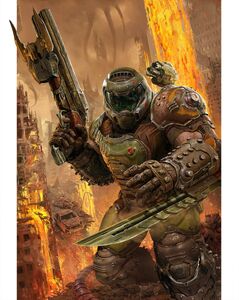 The Doom Slayer in Doom Eternal. 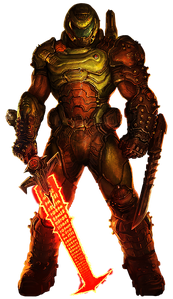 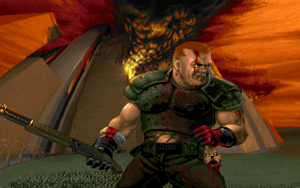 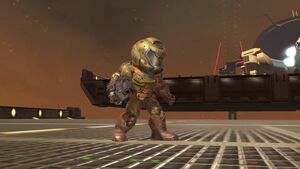