Start a Wiki
Doowee McAdam is the scientific partner of Sally Bollywood.

He wears a green t-shirt with a yellow elephant design and burgundy pants. He has hair the colour of honey and eyes that are a hazel colour very similar to Sally's.

He is very scientific and smart for his age. He is Scottish and considers himself cool. Unfortunately, Doowee is very clumsy. He and Sally often argue, but still, maintain a happy friendship. Doowee is not very good at maths, as seen in "Operation Nerd". Doowee is very popular and "cool" as he had one of the highest scores in the school's most popular student vote. Doowee is sometimes cowardly while Sally is brave, but with each other's help they end up saving the day.

He's a quite flirtatious type as he tried to flirt with Jasmine, Jaya, and Sinitta. Doowee once fell in love with a client named Sinitta, only to find she was manipulating him. Emma has a crush on him and when she confessed this, Doowee smiled and blushed.

Doowee enjoys Mrs. Apu's cuisine and loves her curry. Doowee invents many gadgets, all of which work correctly, though most of them don't seem to work at first. Doowee, though not as sporty as Sally, often ends up helping her up, even though Sally thinks his inventions are ridiculous. 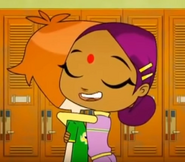 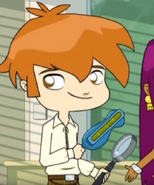 Add a photo to this gallery
Retrieved from "https://hero.fandom.com/wiki/Doowee_McAdam?oldid=1852609"
Community content is available under CC-BY-SA unless otherwise noted.