Various depending on episode.

Dora Marquez is the main titular protagonist of the Dora the Explorer television series. She is a 7-8 year old Latina-Asian tomboy who embarks on a trip in every episode in order to find something or help somebody. She asks the viewers at home to help her find new ways to reach places with the help of Map. She also teaches viewers Spanish, introducing them to short words and phrases.

A teenage Dora appears in Dora and the Lost City of Gold. She's much less mellow and more feisty than when she was younger, dedicating herself to becoming a treasure hunter and explorer, much to her parents' chagrin. Her adventurous lifestyle and fierce spirit befuddles her classmates.

Dora has brown eyes and short, brown hair. She wears a pink short-sleeved t-shirt, orange shorts, white Velcro shoes with pink soles, frilly yellow ankle-high socks and a yellow bracelet with a blue flower around her right wrist. She also normally wears one her friends, Backpack. She is of mixed Mexican and Japanese descent and from California.

In Dora and Friends: Into the City, She wears a hot pink dress with a flower design on the side, purple trim and sash, blue denim leggings, and pink converse sneakers. She also wears a silver, magical charm bracelet on her right wrist. She also keeps her living purple backpack, However, it becomes a little different after her bottom side got torn apart on the cliff but Kate was able to mend her. While mending her, Isa's flower, Bud became sewn into Backpack. Its color is now lavender with pink on the bottom.

Dora has relationships with all of the characters she meets, failing even to hold a grudge against the mischievous fox, Swiper. Despite her cuteness, sweetness and beauty, she hates villains only when it seems that compromise is impossible, and even in these cases, fails to display actual anger. She gives others a chance to try their hands at tasks even when she herself might have an easier time with them. Dora values her family, whom she loves openly, though she spends little time indoors at home with them. She tries to introduce her traditions and customs, subtly and without compulsion, to those who are not familiar with them. Dora is fond of Boots, who became her best friend when she saved his beloved red boots from being swiped by Swiper. 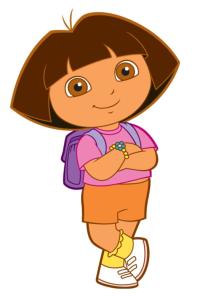 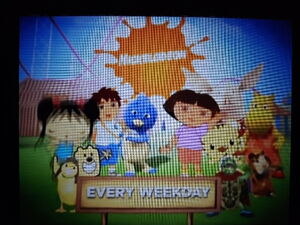 Dora with other Nick Jr Characters. 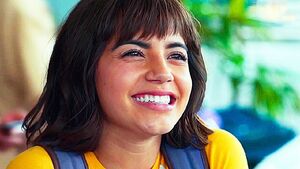 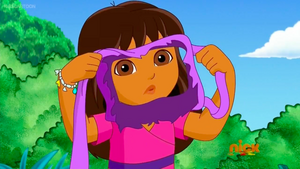 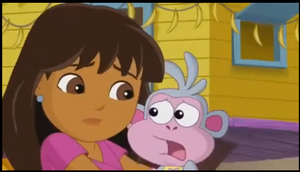 Retrieved from "https://hero.fandom.com/wiki/Dora_Marquez?oldid=1801028"
Community content is available under CC-BY-SA unless otherwise noted.