Dora Milaje are a team from Marvel Comics, the Marvel Cinematic Universe, and other Marvel productions. They are Wakanda's elite task force of special agents, essentially Wakanda's version of S.H.I.E.L.D.

One of the Dora Milaje appears with King T'Challa.

The Dora Milaje served King T'Chaka during his time as the Black Panther. In 1992, two Dora Milaje accompanied T'Chaka to the home of Prince N'Jobu in Oakland, California. After confirming N'Jobu's identity, they struck their spears on the ground, causing the lights to go out. When the light returned, King T'Chaka was standing betwen them. After embracing his brother, T'Chaka dismissed them back to the Royal Talon Flyer on the roof. 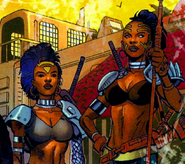 Retrieved from "https://hero.fandom.com/wiki/Dora_Milaje?oldid=1916904"
Community content is available under CC-BY-SA unless otherwise noted.