Dorothy Gale is the main protagonist of The Wiz. She is portrayed by Diana Ross in the movie. She is a schoolteacher who is swept up in a twister and sent to the Land of Oz. She embarks on a quest to find The Wiz to help her get home to New York City. Along the way she befriends the Scarecrow, Tin Man, and Cowardly Lion who join her in her quest.

In the beginning of the film, Dorothy Gale lives with her Aunt Em and Uncle Henry. Extremely introverted, she is teased by Aunt Em for never having been south of 125th Street, as she has delayed moving out to start her own, independent life as an adult.

While Dorothy cleans up after the meal, her dog, Toto, runs out the open kitchen door into a violent snowstorm. She succeeds in retrieving him but finds herself trapped in the storm. A magical whirlwind made of snow – the work of Glinda, the Good Witch of the South – materializes and transports them to the realm of Oz. Released by the snowstorm, Dorothy smashes through an electric "Oz" sky sign as she descends from the atmosphere, and which falls upon and kills Evermean, the Wicked Witch of the East who rules Munchkinland. As a result, she frees the Munchkins who populate the playground into which she lands; they had been transformed into graffiti by Evermean for painting the playground walls. 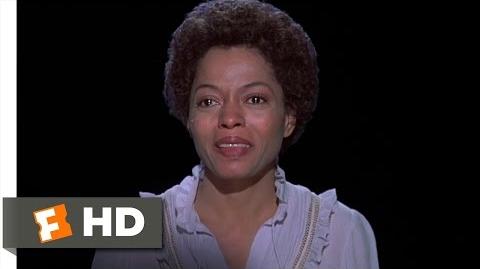 The Wiz (8 8) Movie CLIP - Home (1978) HD
Add a photo to this gallery
Retrieved from "https://hero.fandom.com/wiki/Dorothy_Gale_(The_Wiz)?oldid=1616324"
Community content is available under CC-BY-SA unless otherwise noted.