Double Clutch is a long-time expert on using diversions to confuse and disrupt Decepticon activities, and it's all thanks to his Rallybots. The drones under his command are fast and noisy enough to disrupt enemy optical and audio sensors, and also have a variety of built-in electronic countermeasures that can really mess up Decepticon tactics.

Double Clutch has always been a master of diversionary tactics. His entire team is built around the idea of confusing and disrupting Decepticon operations. The speed and noise of the Rallybots alone is enough to strain any robot's sensors. Add to that all the electronic countermeasures built into the team, and the Rallybots become the single greatest threat to Decepticon strategy.

Part of the second wave of Power Core Combiners 5-Packs, Double Clutch is a Scout-sized muscle car of undetermined model. He can also transform into a super-mode torso, which uses Power Core Combiner drones for limbs. He comes with four Rallybotdrones, which automatically transform from vehicle to limb using Automorph Technology when clipped onto Double Clutch. When detached, they transform back to vehicle mode. Thanks to the universal connection peg system used, he can use any other Power Core Combiner drone as a limb. Amusingly, his torso mode crotchplate is his alt mode's trunk, which can open and close in vehicle mode.
Several design flaws have unfortunately plagued Double Clutch: an exceptionally loose torso-mode head is but the least of these, as floppy elbow ball joints and ill-fitting pegs on his forearms leave his torso mode shoulder assemblies very loose and unable to stay pegged in place as the drones are attached.
Later releases have not one, not two, but four minor retools to deal with these issues. The troublesome torso mode pegs that plagued earlier releases have been substantially thickened, somewhat dealing with but not entirely eliminating the looseness problem. The pegs that hold his torso mode's head plate on to the chest have been lengthened and the awkward slots they once fit into switched to holes, although once again this does not entirely fix the problem. The fin that slots in place to form the lower torso has been retooled to have an angled edge on the end, so it no longer wiggles and resets the entire upper body when touched. Whew.

This mold was also used to make Racemaster.

Double Clutch and the Rallybot were also released as part of a Walmart-exclusive Black Friday value pack, combining a 5-pack team with a Commander 2-pack via packaging tape and a couple of stickers, and costing all of ten dollars. Wow. 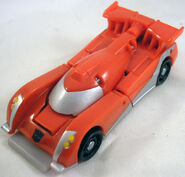 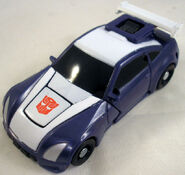 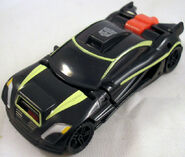 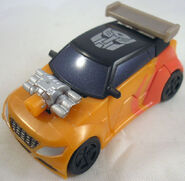 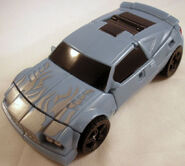 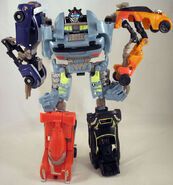 Combined Mode with Rallybots
Add a photo to this gallery

Retrieved from "https://hero.fandom.com/wiki/Double_Clutch?oldid=1613010"
Community content is available under CC-BY-SA unless otherwise noted.