Doug is an original character who first appeared in Telltale Games' The Walking Dead. Doug is a likable and non-threatening IT technician. He is incredibly resourceful, intelligent and extremely logical, and is passive-aggressive when it comes to conflict.

He was voiced by Sam Joan and modelled after Doug Tabacco.

Doug worked as an IT technician and considered himself to be a geek. He moved to Macon, Georgia two months prior to the outbreak to live with his uncle. He spent some time traveling Europe, namely Belgium, when on vacation. During the outbreak, when Carley and her colleagues were attacked by walkers, Doug came to their rescue but only managed to save her. The two of them joined forces with the survivors in the Everett Pharmacy Drugstore as they waited for the military to roll through.

Doug is first seen in the drugstore along with the other survivors. Throughout the group's time inside, he is assigned to keep a lookout on the street. Once spoken to, Doug asks Lee if he wants to take a look outside. Once out there, Lee can choose to go back inside or examine what is around him. When they attempt to retrieve the keys off of Lee's brother, Doug uses his tech skills to program a universal remote from the drugstore office to turn on a set of TVs across the street. This distracts the walkers so Lee can sneak outside and retrieve the pharmacy keys from his brother's corpse. When the walkers notice Lee, Doug warns him and they close the gate as the walkers approach. When Lee and Lilly accidentally trip the pharmacy alarm, Doug helps Lee and Carley hold up the barricades against the walkers while the other survivors prepare to escape.

Lee will have to choose to save either Carley or Doug when the walkers attack the pharmacy. The two get pinned when trying to defend the windows, with Carley attempting to reach for her ammunition and Doug being dragged out of the window.

If Lee chooses to save Carley over Doug, he will be pulled out of the pharmacy window and devoured by the walkers. Later, Carley will feel terrible about what happened to him, but understands Lee's decision.

If Lee chooses to save Doug, Carley is out of ammunition and is eaten by walkers while Doug escapes with everyone else outside. Later at the motel, Doug expresses regret that Carley is dead, but doesn't blame Lee, claiming that this is just survivor's guilt. He still wishes that Lee chose Carley instead of him.

Three months later, Doug will be seen with the survivors when Lee and his group return from hunting. Doug will be a passive member in the discussion over whether to let Ben and Travis/David stay. However, he seems to agree with letting them stay. While Lilly gets upset and forces Lee to decide how to divide the day's rations, Doug is making an alarm system to keep the walkers away. If Lee asks Doug if he wants some food, Doug will refuse any offers (unless given the apple). When Katjaa calls out to Kenny and Lee to say that Travis/David isn't going to live, she and Lee are attacked. Doug tries to help by hitting Travis/David with a plank, only knocking him over. Just a few moments after Travis/David is killed, and Ben has told that it isn't the bite that makes you turn, Doug's alarm goes off to reveal the St. John brothers approaching. Doug goes with Lee, Mark, and Ben back to the dairy farm, where he takes the time to discuss with Lee the practicality of the St. John's electric fence. Upon arriving at the dairy, Brenda St. John hands over some food to Doug for the group. Doug and Ben go back to the motor inn to get the rest of the survivors. They both stay there while the rest head to the farm.

Doug later gets Lee's attention using a laser pointer he found earlier. Lee tells Doug and Ben to look for a way inside the house from behind. They arrive just as Andrew and Lee are in a fight. Doug saves Lee by blinding Andrew with the laser pointer. As they leave the farm, he fixes the video camera Lee found, where it is revealed that Jolene had been spying on the group.

Doug appears if saved in "A New Day". He stays out of the argument between Kenny and Lilly, but adds that he thinks Lee should have tried to save Beatrice to Kenny's annoyance. He feels he doesn't do enough for the group since there is little for him to work with given his speciality not being weapons or combat. He later goes to work on the fence while Lee talks to Lilly. If asked about his position on guns, he says he is not wild about them, nor is he the best shot. He can also share knowledge to Lee about gypsum, an alternative to lead in pencils.

When the group is rounded up by the bandits, he escapes after Lilly snipes one of them. Seeing a chance, he quickly grabs Jake's gun and shoots Linda. He runs out of ammo, and runs to work on the RV. He aids Lee by warning him when and where bandits and zombies appear. After humorously using a hammer to fix the RV's engine, the group flees the motor inn in the RV. Lilly accuses Ben of being a traitor, with Doug trying to diffuse the situation and earning Lilly's ire in the process. He stays out of most of the argument, but gets fed up with Lilly throwing accusations. When the RV pulls over, he joins in on the argument by defending Ben. When Lilly is about to shoot Ben, Doug pulls him out of the way but accidentally gets in the way and is shot in the back of the head in the process.

If Doug was saved in "A New Day", then 184 days into the apocalypse, Russell will lie next to Doug's rotten body if he chooses to hide from Nate. If Russell stays on his feet, the player can only see his body laid next to Russell's feet very quickly. Curiously, his body has been noticeably moved, and the zombie that was run over by Kenny is gone. One of his eyes are open, his skin is rotting, and the bullet hole by Lilly is still there.

Doug is generally a kind, quiet and gentle person. The whole time he spends with the group, he does not earn the dislike of anyone in particular except Larry who finds reasons to dislike everybody. Doug is readily knowledgeable when it comes to technology yet uncoordinated in both making decisions for himself and with the defense of his group. He mentions having robots before the outbreak and that he spent a lot of time alone. He was capable of fixing and manufacturing most things and had a wide knowledge of most scientific elements. 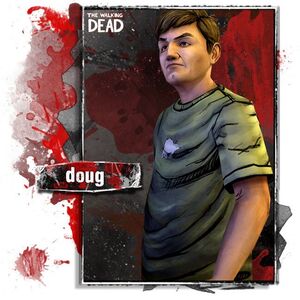