Going to Mars without Earth

Manipulate Quaid into going to Mars so to infiltrate the mutant rebellion (as Carl),
Foil Cohaagen and Carl's plans (as Doug)
Going to Mars (succeeded)
Save Mars from Vilos Cohaagen (succeeded)

Douglas Quaid is the main protagonist of the 1990 Science Fiction/Action Adventure movie, Total Recall. He was played by Arnold Schwarzenegger in the 2012 remake he was portrayed by Colin Farrell .

He begins to have disturbing dreams about Mars and a woman, in the year 2084. His wife, Lori Quaid, secretly a minion of Vilos Cohaagan and villain, sends away the dreams by saying to stop thinking about these dreams and Mars. Later Quaid goes to Rekall for a memory trip to Mars as a spy fantasy. But before the memory goes inside of him there's something that goes terribly wrong and then goes between fantasy and reality.

Quaid reveals memories of really being a spy and then the company tries to make it like it never happened and sends him home. Then he gets attacked by his buddy, Harry, and a group of construction workers, who he's forced to destroy with his new found fighting skills. He then gets into a fight with Lori, who says that she's not his wife and that their marriage was a lie and she was sent by Vilos Cohaagen, the ruler of Mars and main villain, to watch him.

Richter, Cohaagen's right-hand man and villain and Lori's real husband, atttacks Quaid with a cadre of goons and Quaid escapes. Then Quaid gets a suitcase of all kinds of things like money and tools by himself who says he's Hauser, who says he was one of Cohaagen's henchmen but discovered an artifact and did a memory wipe for protection. He recieves instructions from Hauser to get rid of the tracking object within his head before sending Quaid to Mars. There he meets Benny, taxi driver mutant and villain, and Melina, his love-interest and heroine, who still thinks he's in league with Cohaagen.

Then Dr. Edgemar, Cohaagen lackey and villain, and Lori meet Quaid, in his hotel room and force him to swallow a pill or suffer the consequences of a lobotomy and him committed. Then Quaid shoots and kills Dr. Edgemar and then Melina kills Lori. Then with the aid of Benny, they go through tunnels, where they go to a base of heroes and meet Quato, the leader and hero, who orders Quaid to start the reacter that will give Mars breathable air to everyone and kill Cohaagen's corrupt, money-making of air. But they get betrayed by Benny and attacked by Richter, who says Mr. Coaagen wants to see you.

Then Cohaagen explains to Quaid and Melina that his spy fantasy was a way to take them to the resistance heroes and then Hauser and Cohaagen order Hauser's memory to be re-implanted into Quaid and Melina to be his wife. But the heroes manage to escape and kill Benny, Richter, and Cohaagen's other henchmen and Quaid reaches the Reacter Control Room, where he sets off a bomb that sucks Cohaagen into the Mars surface, which kills him. Then Quaid activates the reacter, which releases air to everyone and everything, before he and Melina are sucked into the Martian surface. As everyone and everything gets air, Quaid and Melina kiss. 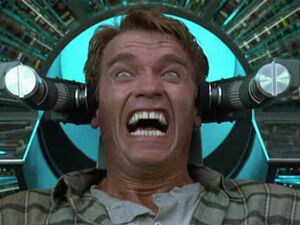 Retrieved from "https://hero.fandom.com/wiki/Douglas_%22Doug%22_Quaid/Carl_Hauser?oldid=1691267"
Community content is available under CC-BY-SA unless otherwise noted.