Stop himself from stealing the time machine from Mr. Black. (failed)

He was voiced by Robert Benfer.

Chip briefly travels back into the distant past with Dr. Brown along with his friend Rick the Prick. Upon their arrival to the distant past, the trio sees two primitive blue Klaymen dressed in orange, tattered togas where one is beating up on the other with a club and both are insulting one another by calling each other "Nanner". In an attempt to end the fight, Dr. Brown intervenes and attempts to introduce himself. However, the antagonistic kaveman continues to passively abuse the other kaveman with his club despite Dr. Brown's efforts. Disgusted by their behavior, Dr. Brown scolds the antagonistic kaveman & travels forward in time to the present with Chip and Rick in tow. After their departure, the victim kaveman pulls out a cattle prod from behind him and uses it to shock and kill the antagonistic kaveman, setting the tone of intelligence overcoming brutal oppression in the film.

Upon their arrival to the present time, Chip confronts Dr. Brown on the fact that all of his accomplishments are outshined by his uncle's time machine and that no one acknowledges him because of it, however, it immediately becomes apparent how indifferent Dr. Brown is to Chip's distress when he's unresponsive and walks off into the distance while Chip is in midsentence. With Dr. Brown having departed from their presence, Chip, jealous of his uncle's success and popularity.

When Chip engages in an emotional breakdown, Dr. Bob asks why it's so important for him to be a part of the crew to which Chip responds by revealing that he feels overshadowed by Dr. Brown's one accomplishment in discovering time travel. Mr. Black then refutes Chip's claim by stating that Dr. Brown is a fraud, that he himself invented time travel and the Time Hat was stolen from him by Dr. Brown. Mr. Black then proclaims that if he ever found Dr. Brown that he'd kill him and tells Chip that if he tells him where Dr. Brown is that he'd kill him for Chip. However, still wanting the glory and fame of being among the group to make the first contact with alien life, Chip uses Dr. Brown's whereabouts as a bargaining chip to worm his way into the crew.

After Chip learns that the aliens attack and killed the klaymen, Dr. Brown returns to the current time period with a modified version of the time hat to find that Chip is completely aware of his secret. Out of guilt, Dr. Brown proclaims "I wanna cook my face!" and agrees to return to the point where he stole the time hat and help undo all the events leading up to this point. However, before Dr. Brown and Chip can travel back to the period in which Dr. Brown stole the time hat from Mr. Black, a long appendage whips it's way onto the surface of the table and up climbs King Womp's new subordinate.

This new subordinate forms a blade out of it's right arm, whips it across the table and decapitates Dr. Brown causing the time hat to land onto the roof of the Toshiba TV/VCR hybrid.

He is a normal Klayman, and wears a time traveling helmet.

Brown was presumably a smart Klayman since he was a scientist. But he was probably stupid like other Klaymen, as when he thought Rick was making fun of somebody's English since Rick had piercings on his face. Brown can be remorseful, as when Chip tells him he stole the time machine from Mr. Black and learn he was dead because of him, and telling himself he was a bad person. 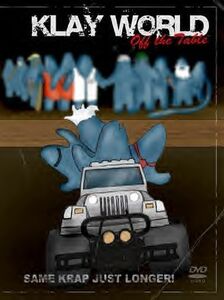 Dr. Brown on the movie cover of Klay World: Off The Table.
Add a photo to this gallery

Retrieved from "https://hero.fandom.com/wiki/Dr._Brown?oldid=1691988"
Community content is available under CC-BY-SA unless otherwise noted.