Dr. Chase Meridian is the love interest of Batman and the tritagonist in Batman Forever.

She is portrayed by Nicole Kidman, who also portrayed Joanna Eberhart in The Stepford Wives, Silvia Broome in The Interpreter and Norma Jean in the Happy Feet series.

Chase first appears when Batman is called to capture Two-Face who is holding people hostage. She instantly falls for the Caped Crusader who was trying to apprehend Two-Face, who was robbing the bank. After killing several bank guards, Two-Face took one hostage. Batman arrived and Chase was immediately impressed by him; it was clear that she was attracted to him. It was revealed that she was a specialist in multiple personality disorders, which was why she was present. Batman informed her that he had read her work, which led him to believe that she is naive. She was flattered to hear that he read her work and flirted with him, while also showing him that she was at par with his level of intellect. After Batman rescued the captive security guard and returned the vault to its original position, Chase was disappointed to find that Batman didn't return with it.

Later, while checking out a department of Wayne Enterprises, Bruce noticed the Batsignal, so he rushed out of the department to go find out what Commissioner Gordon had to tell him. When he arrived Gordon wasn't there, but Chase came out of the shadows to greet him, wearing a short black dress. She was clearly trying to seduce Batman, but covered this by telling him that she had spotted Two-Face's Achilles heel - his coin. She made it known that she was attracted to Batman but he told her that the Batsignal was in case of emergencies, not a beeper. She flirted with him again stating how she was always attracted to the wrong sort of man. She was very persistent, claiming that Batman liked strong women and had even dressed in a revealing dress. The two got very close and nearly kissed when Gordon arrived, asking what was happening, Batman claimed it was a false alarm and fled.

Bruce Wayne visited Chase at her home. When he arrived he heard grunts and punching, so he broke the door down thinking Chase was in distress. But then he realized she was actually boxing a punch bag. He went there to show her the riddles, left by an anonymous sender, hoping she could psycho-analyze them and the type of person that would send them. She told Bruce that the sender was obsessed with him and that he may continue to be obsessed until that which he is obsessed with is dead (even suggesting the sender might attempt to kill him himself to end his obsession). In her apartment there were a lot of psychological items such as an ink blot which the patient has to say what they see (Bruce saw a bat), and a doll which was meant to keep bad dreams away. Bruce then invited her to the Gotham Charity Circus, an invite that she accepted.

The couple sat in the crowd enjoying the circus. Bruce invited her to go rock climbing with him. Although tempted as she herself had a love for climbing, she declined, stating that she had met someone (meaning Batman). Two-Face then disrupted the circus, announcing that he would blow it up if Batman didn't reveal himself. Bruce tried to tell him but his voice was drowned out by screaming crowds, so he left to take out some thugs. Chase remained in the crowd and watched the commotion as Two-Face killed three of the four Flying Graysons, an action which shocked the audience.

Bruce returned to Chase's apartment, where she gave him the doll which dispels bad dreams. Bruce revealed to Chase that he was having sketchy visions about his parents' death. She tells him that what he was experiencing were repressed memories. The kettle boiled, so Chase left the room. While Chase was gone, Bruce discovered a folder full of articles about Batman and commented to her when she returned that this seemed to go way beyond takingWORK HOME. She admitted that she found Batman fascinating - clinically. She questioned why a man would do this, theorizing that he was cursed to pay some great penance, as if he had committed a crime for which he must endure a "life of nightly torture". Bruce suggested her interest went beyond professional, and she asked if he was jealous. The pair got intimate and shared their first kiss when Alfred contacted Bruce to inform him that Dick Grayson had stolen the Batmobile, and again Bruce had to leave.

A few days later, Bruce took Chase to Edward Nygma's gala unveiling of his new and improved "Box". Edward was taken with Chase's beauty, stating "and a grand pursuit you must be" after hearing her name, and then kissing her hand. Nygma revealed his new invention and everyone, including Chase, was impressed except for Bruce, who Nygma deemed too timid to try the Box out. To make Bruce jealous, Edward danced with Chase and watched as Bruce took the bait and entered the Box. Two-Face gatecrashed the unveiling and Chase was left to observe the commotion until one of Two-Face's cronies grabbed her by the throat. Batman rescued her, they shared their first kiss and she told him to meet her at her place at midnight before he left. He met her there. She was wrapped only in a bed-sheet and kissed him before stopping in disbelief - she told him she had fantasized about him so much, but now that she had him, she was wishing he was someone else. Batman walked away and secretly grinned to himself, knowing she meant himself as Bruce.

Halloween came and Chase arrived at Wayne Manor to spend time with Bruce. She revealed to Bruce that she had always been attracted to the wrong sort of man, but since she had met him she had changed. She then accidentally knocked a vase containing two roses to the floor; this triggered a repressed memory for Bruce. He told her about his memory, and about how he fell into the cave that would later become the Batcave, and encountered a bat that changed his life forever. He was about to reveal his secret when the two kissed, and Chase realized that Batman and Bruce Wayne were one and the same person. Riddler and Two-Face infiltrated Wayne Manor and Two-Face's thugs chased Bruce and Chase. Two-Face shot at Bruce but it grazed him and knocked him out rather than killing him. He was about to kill him, but Riddler stopped him, leaving a riddle instead. The thugs grabbed Chase and the Riddler and Two-Face took her captive. In the Riddler's lair, he had her chained up on a sofa where he told her that it was his plan to use her as bait to lure Batman to him.

Batman and Robin traveled to the Riddler's lair to rescue her when Robin was captured by Two-Face. Batman infiltrated the villains' lair, where Riddler revealed Chase and Robin, bound and gagged with duct tape, suspended in the air in tubes above a pit of water and metal spikes. He told Batman he would have to save one of them. But Batman distracted the Riddler and destroyed his mind control device warping the villain's mind in the process. Before collapsing, Riddler pressed a button which dropped Chase and Robin to what should have been their watery grave but Batman saved them both using bat grapples, then defeated Two-Face as well. Edward was taken to Arkham and declared him completely insane, having lost all his sanity from the explosion.

Dr. Burton called Chase, asking her to come to Arkham where Nygma was claiming that he knows who Batman really is. When asked who, he told her that he was the Batman. Outside Arkham, Chase met with Bruce telling him that his secret was safe, he gave her dream doll back and they kissed. She then got in the car with Alfred as Batman and Robin went to patrol Gotham City. 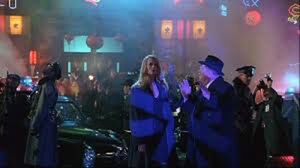 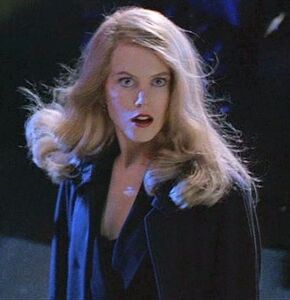 Chase falling in love with Batman after meeting him 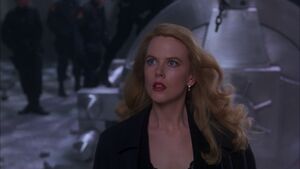 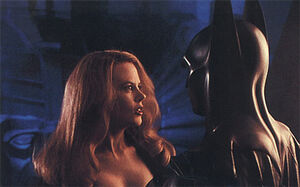 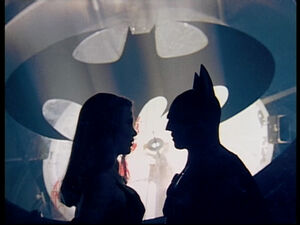 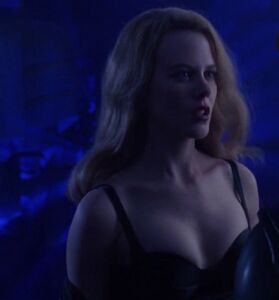 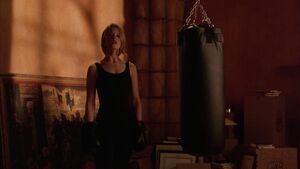 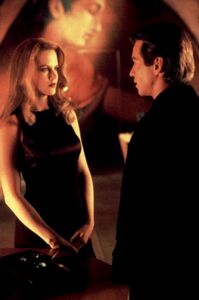 Bruce visits into Chase's room about the riddles he keeps receiving. 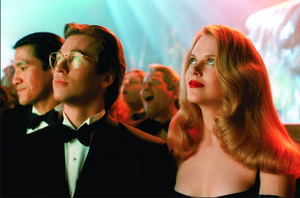 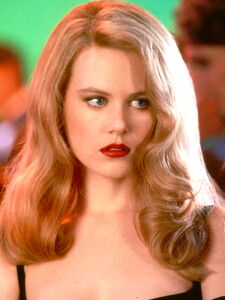 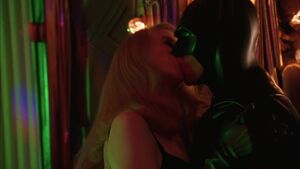 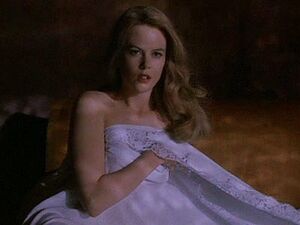 Chase is coving herself when Batman came to her house 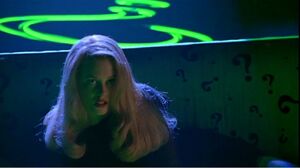 Chase being held by The Ridder 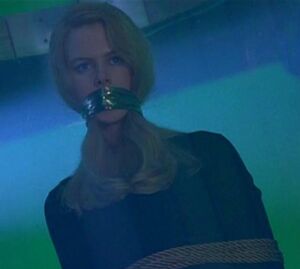 Chase kidnapped by The Riddler and Two-Face 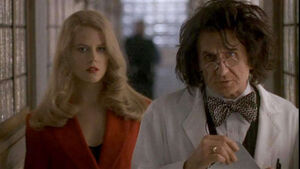 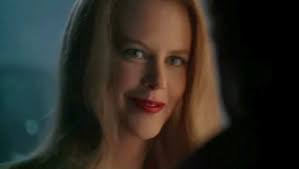 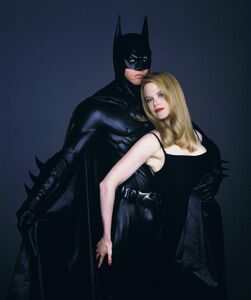 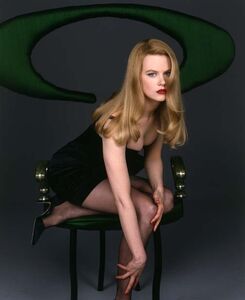 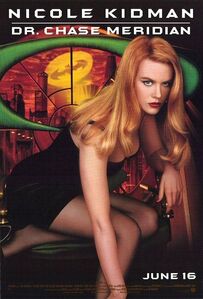 Retrieved from "https://hero.fandom.com/wiki/Dr._Chase_Meridian?oldid=1659388"
Community content is available under CC-BY-SA unless otherwise noted.