Dr. Delbert Doppler is the deuteragonist of Treasure Planet. He is an alien with the appearance of being some kind of dog/human hybrid, and a notable and well-off astronomist.

He is voiced by David Hyde Pierce.

In Treasure Planet, Doctor Delbert Doppler is seen as the classic astronomer who trips over his own feet and words yet seems to be one of the smarter characters, despite his choices in fashion. He is relatively pacifistic, not handling weapons if he can possibly avoid it.

Delbert Doppler is a long time friend of Sarah Hawkins, Jim’s mother and after the BenBow Inn burnt to the ground, he housed her and Jim without hesitation, saying they could stay as long as they needed to.

When finding out about the maps potential, Doppler immediately agreed to go searching for the treasure with Jim, convincing Sarah it was a good idea.

He pointed out to her wisely that he wasn't just doing it because he wanted to go; a few character-building months in space might help with Jim's increasingly rebellious nature.

Doppler funded the trip. After arriving at the space port on Montresser both Jim and Delbert came to accompany the ship to Treasure Planet, Delbert in what he assumed was an appropriate ‘Space Suit’ sold to him by a two headed sales woman.

When running into one of the many pirates, Jim was unable to understand what the alien was saying, until Doppler who was fluent in ‘Flatula’ was able to talk to the alien and even making him laugh.

When he confused Mr Arrow for the captain, he was quickly corrected and watched in astonishment as Captain Amelia flew through the ship to land right in front of him.

Amelia’s appearance caught the doctor off guard but what seemed to irritate him more was the fact that Amelia found it enjoyable to poke fun at his space suit.

When Doppler almost let the secret of the Map slip, Amelia told him to meet her in her estate where she told him that she did not care for the crew he hired, starting the apparent hate relationship between the two.

The taking off of the ship was an event for Doppler but he ignored all of Amelia’s helpful instructions and was much worse off for it.

During the black hole disaster, Doppler, with his calculations of the waves, told Amelia the accuracy of them, thus they were able to escape.

Tripping over his words again, Doppler tried to admire the captain but when she credited the doctor for his work he made a complete fool of himself:

As the ship reaches Treasure Planet, Silver and the pirates finally show their true colors, forcing Jim, Amelia and Doppler to defend themselves, at this point it is apparent that Doppler never held a gun in his life as he almost shot Amelia.

But when trying to abandon ship in a smaller boat, with a lucky shot, Doppler was able to send several pirates to the planet below.

The boat crash landed on the planet and Amelia was in need of medical attention, but after Delbert had a small break down. Jim went back try and retrieve the map from the ship where Doppler was left with an unconscious Amelia, later captured and held hostage by Silver and his monster gang.

When he and Amelia were left with a single guard while Silver and Jim went to find the treasure, Doppler admitted that he was a screw up which she replied with that he was useful.

However when he noticed his hands had come loose from their bindings behind his back. From there he was able to escape by tricking the alien holding them prisoner out of his pistol.

Going back to the ship and coming back for Jim, the cast was able to make it back to the port, where he and Amelia shared a hug, before breaking apart, embarrassed.

The ending of the movie was proving a point to the audience that after so much hardship that all the characters were better off, including Doppler as he now had a family and a life partner, Amelia. 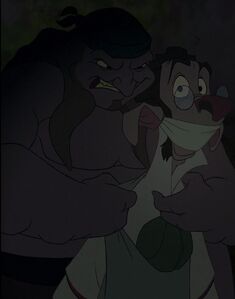 Dr. Doppler captured by John Silver and his thugs
Add a photo to this gallery

Retrieved from "https://hero.fandom.com/wiki/Dr._Doppler?oldid=2252938"
Community content is available under CC-BY-SA unless otherwise noted.