Dr. Elmer Hartman is the Griffin Family's doctor, despite displaying a high level of incompetence in most episodes.

He has a nephew, who is most likely a small child. He also has a cousin named Marshall. He was named after Seth MacFarlane's good friend and fellow animator, Butch Hartman.

Dr. Hartman, Carter Pewterschmidt, and Seamus's voices are nearly identical, which has been mentioned several times on the DVD audio commentaries. The similarity is shown and discussed in "Believe It or Not, Joe's Walking on Air" and a DVD-exclusive scene in The Shawshank Redemption segment of "Three Kings".

In "Stewie Loves Lois", he gives Peter Griffin a prostate exam. Peter mistakes the exam as rape, sues him, and the ensuing court case strips him of his license. Peter's victory becomes bittersweet afterwards, when frequent urination turns into a cancer scare. He asks Hartman to check him out, and turns out Peter is fine. Hartman's medical license is reinstated at the end of the episode.

He has a tendency to use shtick, misleading words which the Griffins presume to be diagnosis, but turns out to be something else, and that they are medically fine.

He gets a stethoscope for Christmas in "Road to the North Pole".

In "New Kidney in Town", he gets a shoutout from Peter when Peter was a contestant on The Price is Right. He also returns from vacation in Cancun with a tan. Dr. Hartman comments about creating a man-sized hostile chicken but this is glossed-over during Peter's concern about getting a kidney transplant. He becomes Peter's kidney donor. He also attends the James Woods Regional High School essay contest assembly.

He is an alcoholic, participating in Alcoholics Anonymous meetings Peter attends in "Friends of Peter G". He admitted to once giving someone a back adjustment after drinking which he wasn't skilled to do, having not attended the weekend of class that was required.

In "Ratings Guy", it is revealed that Elmer Hartman is the worst doctor in the hospital.

In "12 and a Half Angry Men", Elmer Hartman is among the people on the jury at Mayor Adam West's trial.

In "The Simpsons Guy," Elmer Hartman is seated in the courtroom next to the similarly incompetent doctor Nick Riviera. 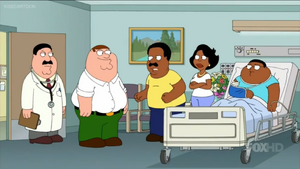 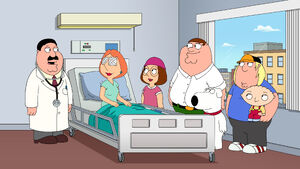