The Story of Doctor Dolittle

Doctor for humans and animals.

Talking with the animals.

When he was young John was talking to his dog, his father didn't like it because he think his son acting strangely, so when that too far John father ride the dog away to a other family after he wanted to exorcism him. When he finally grow up he seem to have forgotten his power, and have certificate in doctor in medecine, he also have two daughters Sherice and Maya, when he was driving his car he almost hit Lucky a homeless dog who he heard his voice after he insulted him. That mean his power come back, but doesen't know that, because of it he was interned in a hospital cell room when he was a boy. He was also bring Lucky to his home after saving him from the pound, fear to be weird again he decide to not talk to the animals because he was make a fool of himself, and scared to lose his family. But he decide to keep his word and save the animals, after heard his father speaking to Maya because he had now convince him, so after his wife and daughters go to the coference he go with Lucky to the circus to help Jake a injured Tiger he meet a few day before refuse to help him. When he tries to save Jake the Tiger his wife Lisa finally go to help him and save the Tiger.

In the sequel he help humans and animals, was supposed to go in vacation to travel with his family after promised to his older daughter Sherice, but he had a new mission protected a forest by make a bear named Archie find a female and save his specimen, he also know his older daughter had a boyfriend named Eric who he didn't like. When he take Archie to the forest all animal find the bear weaird because he came from a circus, but he have also a rival who want to destroy the forest. So when he wanted Archie to learn how to be a alpha male, Archie push him and go searh for the honey bee hunt after he tell him how he can have Eva, after Archie finally win Eva heart he learn Archie get trapped. He wanted his wife to help him, they failed and he learn the appeal was rejected because Archie judged too dangerous, He see his older daughter have the same gift has him when he heard her said to Archie "Love is beautiful, and you ain't nothing without love", he was now happy his other daughter have the same gift like him and Maya. So with the help of the animals of forest animals, daughters and future son in law go to save the forest, when they tries to negociated it was a refusal at first, but finally get to agreement and Archie is finally free, and learn by Archie he finally go to make a family with Eva and John leave the forest to be with his family maybe finally travel the world with them.

He didn't appear in the others spin-off of movie series, but he's mentioned in all of them. 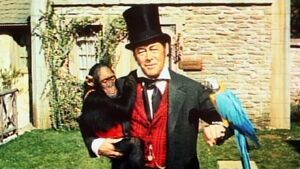 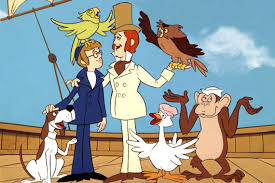 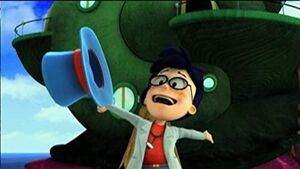 Add a photo to this gallery
Retrieved from "https://hero.fandom.com/wiki/Dr._John_Dolittle?oldid=1759965"
Community content is available under CC-BY-SA unless otherwise noted.