Being with his animals.

To reopen his manor to the public (succeeded)

Heroic Doctor
Dr. John Dolittle is the titular protagonist of the 2020 fantasy adventure film of the same last name.

Dr. John Dolittle is a veterinarian, who becomes a recluse due to the death of his wife. but is forced to go on a journey to find a cure for the queen. He gains an apprentice named Tommy Stubbins and encounters more animals and adversaries.

After being persuaded by Polynesia the Macaw, Dolittle finally decides to go. Upon reaching her, he finds that the Queen has eaten a poisonous type of nightshade. To be cured, she must eat a fruit from a land far away. Dolittle, Tommy, and a crew of animals put to sail, hoping to find the cure while trying to avoid Dolittle's long ago rival. Dolittle leaves his dog Jip and a stick insect behind to watch over the Queen.

Along the way, Dolittle's boat is attacked by Dr. Blair Müdfly. They are able to escape by attaching a harness to a humpback whale that pulls the boat to safety much to Müdfly’s astonishment.

Dolittle is captured by King Rassouli, his former father-in-law, and is locked in a cage with Barry, a cranky tiger only looking for his mother's approval. Just when it seem Dolittle is in trouble, Chee-Chee the Gorilla breaks in and hits Barry. Dolittle and Stubbins escape only to be captured by Dr. Blair, Dolittle’s rival, and have their ship destroyed. After seeing a saddened Dolittle, Rassouli loans him a boat to honour his daughter.

Dolittle and company arrive at an island where they meet Ginko-Who-Soars, a fire breathing dragon. Ginko begins attacking before she falls due to pain. Dolittle figures out what is hurting Ginko and proceeds to remove armour and bagpipes (from previously eaten trespassers) from Ginko's behind. A relieved Ginko shows Dolittle the tree with the cure. Stubbins gives the queen the plant which cures her. Dolittle's stick bug announces that Lord Thomas poisoned the queen in order to take the crown. The queen has him arrested for treason.

Dolittle re-opens the doors to his sanctuary now including Stubbins. 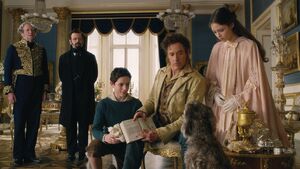 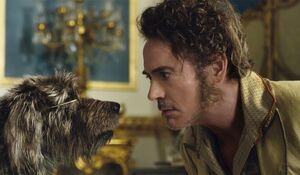