Dr. Joshua Strongbear Sweet is a doctor who appears in Atlantis: The Lost Empire and its sequel. He was voiced by Phil Morris. He was one of the first black minor characters to star in a Disney animated film.

Joshua Sweet is a professional doctor. He is half-African, half-Native-American. When he talks, his voice is loud and boisterous, showing good self-confidence. He has a habit of getting his priorities mixed up, such as when he was introducing himself to Milo and was trying to perform an examination on him at the same time. He is very loyal, being the first member of the crew to stand up to Commander Rourke when he turns on Milo and the Atlanteans.

He also express his dislike for fish; he opens up to Milo about he hates the smell, taste and the scales. 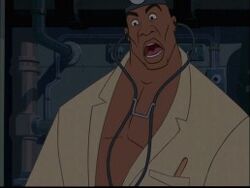 Add a photo to this gallery
Retrieved from "https://hero.fandom.com/wiki/Dr._Joshua_Sweet?oldid=1129575"
Community content is available under CC-BY-SA unless otherwise noted.