Dr. Luigi is the persona/doctor form that Luigi takes in the game of the same name. Dr. Luigi did not begin wearing a head mirror, similar to Dr. Mario, until Dr. Mario: Miracle Cure.

Like Dr. Mario, Luigi in his doctor persona makes use of megavitamins to defeat Viruses (including L-shaped megavitamins, which Dr. Mario has not been seen using). In a similar fashion to the Dr. Mario games, Dr. Luigi will toss megavitamins that the player has to control in order to eliminate the Viruses.

Dr. Luigi wears the same outfit that his brother wears, the only difference is that he wears a green necktie.

It has been suggested that Dr. Luigi has a more laid-back personality than his brother, as in the introduction cutscene to Dr. Luigi, he is seen walking slowly with a tired look on his face. After he sees the Viruses however, he becomes shocked, and prepares megavitamins for use, now looking worried.

Dr. Luigi appears again in Dr. Mario: Miracle Cure, where he uses the same gameplay as in Dr. Luigi's "Operation L" mode. This marks the first appearance of Dr. Luigi on a handheld. Also, he is not seen with his hat, but instead with a head mirror, just like his brother. 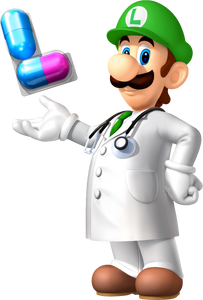 Add a photo to this gallery
Retrieved from "https://hero.fandom.com/wiki/Dr._Luigi?oldid=1479447"
Community content is available under CC-BY-SA unless otherwise noted.