Curing the animals and science stuff

To be with Linda and stop Sebastian before he kill him and Linda.

Dr. Matthew Kensington is the deuteragonist and love interest of Dr. Linda McKay in Hollow Man. He was portrayed by Josh Brolin.

He didn't appear until he was in bed with Dr. Linda McKay who got a call from Linda's ex-boyfriend Dr. Sebastian Caine (Bacon) has developed a serum that can make a subject invisible.

Later, Matt, Linda, Sarah Kennedy, Carter Abbey, Janice Walton and Frank Chase eventually enable the serum to work on a female gorilla and restore the animal back to visibility.

Sebastian once again becomes obsessed with Linda while unbeknownst to him, she has become involved with Matt.

Instead of reporting his success to the military at the pentagon, Sebastian lies to the oversight committee which includes his mentor Dr. Howard Kramer (Devane), convincing his team to go right into phase lll (human testing).

The procedure is performed on Sebastian. It is successful and Sebastian turns completely invisible. He then enjoys sneaking around the lab in order to scare and play harmless pranks on his fellow co-workers.

They become worried that he's taking it too far. After three days of being invisible, however, he is unable to revert to visibility.

Sebastian is quarantined in the laboratory due to his condition and the other researchers construct a latex mask for him to wear around the lab.

Unable to cope with the isolation, he defies instructions and heads to his apartment to bring some things back to the lab.

There, he happens to notice his neighbor disrobing and goes to her apartment where he rapes her, realizing no one will ever know.

Later, Linda warns him that if he leaves again, she and Matt will tell the committee about the experiment.

The team soon discover that they have been watching a recording and that Sebastian has been escaping without their knowledge, Sarah knows Sebastian has killed a dog and that he's becoming a serial killer.

Linda and Matt go to Dr. Kramer's house and confess their experiments. After they leave, Kramer attempts to warn the military but Sebastian, who has followed Linda and Matt to the house, cuts off Kramer's phone connection before drowning him in his swimming pool.

The next day, Sebastian waits until all of the team is in the lab and then disables the phones and the elevator codes except for his code. He removes his clothing and latex mask and invisible, begins his killing spree, with Janice being his first victim by strangulation with an IV cord.

Then, Linda and the others hide in the lab while Matt and Carter take tranquilizer guns to hunt for Sebastian, using thermal imaging goggles.

While on top of a pipe, Sebastian throws Carter toward a steel bar which hits his carotid artery, and leaves him mortally wounded.

Then, Matt tries to shoot Sebastian, but almost got killed until Linda drags him to safety.

After Carter dies from his injuries, Sarah heads to the freezer to get blood for a transfusion but is killed by Sebastian after being shot in the heart with the tranquillized dart and having her head snapped.

He then kills Frank with a crowbar when he lets his guard down, then stabs Matt in the stomach with the crowbar and locks an injured Matt and Linda in the freezer-store room, leaving them to freeze to death.

Sebastian then puts on his clothes and latex mask and completes it with a wig, hat, and sunglasses to look as near human as can be.

Linda then constructs an electromagnet using a defibrillator and other equipment, to open the freezer door. She then gathers parts to assemble a flamethrower.

Sebastian goes to the lab and creates nitroglycerin and puts it in a centrifuge with a timer which is meant to destroy the facility after he leaves; he smashes the keyboard so nobody can stop the machine.

Just as he enters the elevator to leave, Linda appears and fires the flamethrower at him. Sebastian barely manages to escape the flames and the two fight.

Just as she was about to lose, Matt appears and hits Sebastian on the head with the crowbar.

Then, Sebastian recovers and approaches Matt and Linda from behind with the crowbar, but Matt deflects the blow, throwing Sebastian into a nearby circuit box causing the crowbar to hit the circuit box, apparently electrocuting him and rendering him partially visible.

The two are almost out, when an injured and partially visible Sebastian appears, his skeletal, organs and muscles are visible but his skin and hair is gone.

Then, Sebastian fights with Linda and forcibly kisses her one last time before she grabs the elevator cable and knocks the car loose, sending Sebastian falling to his death in a big explosion in the shaft below.

Then, Linda and Matt emerge from the burning laboratory and medics take them away in an ambulance. 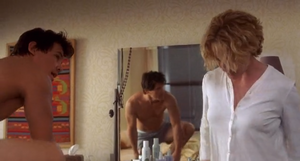 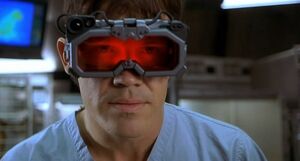 Retrieved from "https://hero.fandom.com/wiki/Dr._Matthew_Kensington?oldid=1946677"
Community content is available under CC-BY-SA unless otherwise noted.