Very intelligent (if not a little hard of hearing)
Great inventor

He is voiced by Russell Brand who also voices E.B. and Creek.

He is an elderly, hearing-impaired scientist, gadget man and good friend of Gru. Being hearing-impaired causes him to mistake Gru's order for cookie robots and a dart gun for "boogie robots" and a "fart gun", respectively. He did briefly leave Gru to work for El Macho before redeeming himself and returning to work for Gru.

Dr. Nefario also appears in the 2015 Despicable Me prequel Minions as a young man taking part in the 1968 Villain Con where he shows off his invention the Freeze Ray whilst being watched on by a then 8-year-old Gru.

Dr. Nefario is Gru's closest and most loyal friend who always comes to his rescue. He has a very high respect for Gru and even believes he is the greatest villain in the world, but he often doubts his abilities and motives. He is also quite eccentric with rather bad hearing due to his age, but although he seemed a little odd at times, he did not seem to be going senile.

Dr. Nefario doesn't like to be unproductive, as he has constantly been seen working on projects to aid in Gru's crimes, and even decides to work for someone else after Gru renounces his former life of villainy.

His accent suggests a British family lineage. Nefario seems to enjoy disco dancing and is even briefly shown doing so alongside Marlena Gru, and in the Boogie Robot scene. 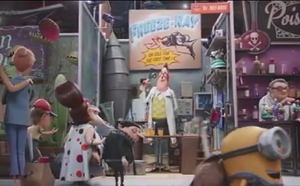 A young Dr. Nefario in Minions