Claiming that he invented various things.

Destroy Cortex's space station as revenge for stealing credit for his work. (succeeded)

Sometime after his defeat in the first game, Nitrus Brio betrayed his master Neo Cortex for constantly stealing the credit to his inventions (such as a working Evolo-Ray) and managed to turn most of Cortex's forces against him. N. Brio also build a giant lazer to destroy Cortex's space station but he still needed the 42 Gems required to focus his weapon. He got into contact with Crash Bandicoot in hopes of convincing the marsupial to collect the Gems he needed and warned Crash that he will continue to oppose anyone seeking Crystals for Cortex. After Crash obtains all of the Gems, N. Brio revealed he would use them to power his lazer using the same planetary energy Cortex wanted to harness for world domination. N. Brio then invited Crash to activate the lazer and obliterate Cortex's space station, thus putting an end to the villain's plans.

Dr. N. Brio is a playable character that can be unlocked in the Pitstop during Spooky Grand Prix event. He is a Acceleration class driver.

"We are ready crash, Would you like to do the...heheheheheh...honors? Hehehahahahahahaha!" 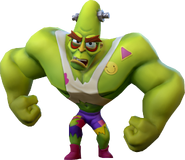 Mutagen N. Brio.
Add a photo to this gallery

Retrieved from "https://hero.fandom.com/wiki/Dr._Nitrus_Brio?oldid=2233641"
Community content is available under CC-BY-SA unless otherwise noted.