Kill all the spiders (succeeded)

Dr. Ross Jennings is the main protagonist of the 1990 comedy horror film, Arachnophobia.

He was portrayed by Jeff Daniels who later played Harry Dunne in Dumb & Dumber.

Ross Jennings is a family physician who has moved from San Francisco with his family to the town of Canaima, CA, he gets a few patients at the start because of the rivalry of Dr. Metcalf because he made a choice not to retire. Dr. Jennings and his son have arachnophobia, which his wife and daughter taunt and joke with them about.

After the deaths of townsfolk, including Dr. Metcalf, he and other heroes discover that the deaths are caused by bites from a vicious species of spiders from South America. Later he finds out that the nest is in his barn. They battle the killer spiders at the house and then Dr. Jennings gets trapped in the basement with the queen and general spiders. Dr. Jennings kills the queen by electrocution.

Then, Dr. Jennings fights the general and kills him and the nest, in the basement, by shooting the burning general into the nest and Delbert, exterminator and hero, kills the rest of the spiders, in the barn, and destroys the other nest and spiders. When all the spiders are destroyed, Dr. Jennings and his family move back to San Francisco, CA. 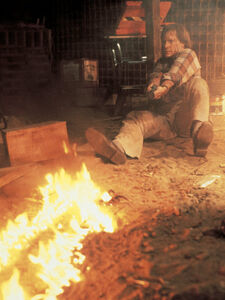