His family
Adrian Helmsley
The Institute for Human Continuity scientists

Presumably anybody who prevents people getting to the Arks. Carl Anheuser would be one of his enemies; but the two of them never met.

Dr. Satnam Tsurutani is a protagonist in the Apocalyptic film 2012. He is played by Jimi Mistry.

Satnam is a doctor at the Indian physicist center where he studies events in outer space and in the Earth's core. One day in 2009, Satnam discovers the largest solar flares in human history have just occurred. Warning his best friend Adrian Helmsley that the flares spewed neutrinos into the Earth's core, these neutrinos are unlike any other, capable of interacting and devouring matter. The neutrinos will cause the core of the Earth to heat up and then cause Earth crust displacement which will cause massive earthquakes and untold damage to the planet.

Dr. Satnam is then next seen when his warnings have been taken seriously by Adrian who meets the President of the United States of America. The President considers doing a lottery to save nearly everybody but his arrogant chiefs of staff convince him it's God's work and they should only save the rich. Satnam appears next in the year 2012 itself when he is talking again to Adrian on webcam, minutes after Adrian just met Jackson Curtis and his kids at the soon-to-erupt Yellowstone Park. Jackson met Charlie Frost, a loner and radio show host who told him he had predicted the Apocalypse happening in exactly this way. Charlie says this last happened in the K-T extinction and this kind of neutrino only affects the Earth once every forty million years.

Next Satnam tells Adrian good luck and then he cuts the feed. Satnam is also seen next in his last scene when he is left stranded in India with his family and half the continent. Satnam says they didn't get picked up in the chaos and the obnoxious chief of staff says lots of people didn't get picked up. Satnam has just been displaced from a massive earthquake in India and he tells Adrian that a gigantic tsunami is suddenly approaching India. He says goodbye to Adrian and hangs up. Satnam embraces his family just as the wave crushes down, killing him, his family and everyone in the region.

Satnam would be remembered by Adrian on the Ark where Adrian said because of Satnam, no one would be alive now and they owe him their lives. Satnam posthumously saved everyone on the Arks. 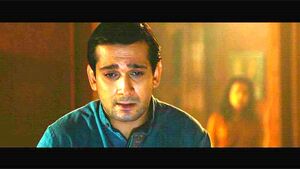 Satnam talking to Adrian on webcam 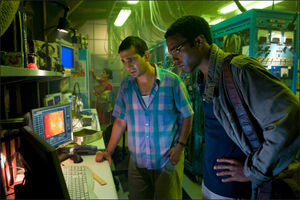 Satnam in the blue shirt with Adrian in his underground lab 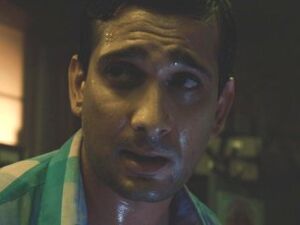 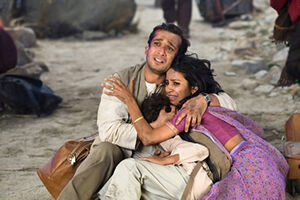 Satnam's last moments before he dies
Add a photo to this gallery
Retrieved from "https://hero.fandom.com/wiki/Dr._Satnam_Tsurutani?oldid=1752604"
Community content is available under CC-BY-SA unless otherwise noted.