Staff Doctor at the Planet Express

going on adventures with his crew

Doctor John A. Zoidberg is a character in the television series, Futurama. He is a lobster-like alien from the planet Decapod 10, who emigrated to 30th century Earth, where he works as the staff doctor for Planet Express, despite his woeful understanding of human physiology and allusions to his questionable credentials.

He was voiced by Billy West, who also voices Fry in the same series, Doug Funnie in Doug, and Stimpy J. Cat in Ren & Stimpy.

He is portrayed as an incompetent doctor due to his frequent surgical mishaps and misdiagnoses but he shows he is far from stupid as he shows he has knowledge in alien anatomy (not human, though he is a self-proclaimed "human expert") and has a Ph.D. in Art History. It was even questioned as to why Professor Farnsworth does not fire him until it is revealed that he is a long time friend and crew member of his. Thus, the Professor won't fire him even though he has shown to be vastly incompetent at his job and is hated by most of his co-workers.

Out of all the Planet express crew members, Zoidberg is considered to be the most caring and innocent member of the crew. He is a sweet and lovable guy who just wants a friend to hang out with but for some reason most people dislike him, especially Hermes Conrad. Despite this, Zoidberg considers everyone to be his friend. However, out of all his co-workers (besides the Professor) Philip J. Fry is the only one that treats him decently and refers to Zoidberg as a friend. At Fry's memorial in "Bender's Big Score", when Leela states they will all miss Fry, John reveals that "He was the only one of you who never struck me!"

He does not even have the guts to stand up to bullies and instead acts in a cowardly fashion towards them. He tries his hardest to prove that he is a trustworthy guy and he is constantly nice towards other people. The ostracism he receives from the Planet Express crew and society causes him to be a very lonely person. He is even unaware that Hermes bullies him constantly and he does not dare to ask Hermes why he hates him so much. Despite this heavy unawareness, Zoidberg like any other employee, has a fear of getting fired. However in the episode "The Six Million Dollar Mon", Zoidberg finally learns of Hermes' dislike of him and lets out his pent up feelings towards Hermes calling the latter a "big jerk" who was selfish and stupid that didn't deserve a friend like him. 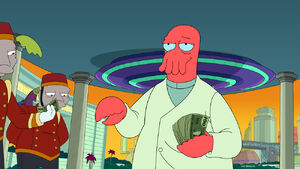 Zoidberg hands out his money to a lot of people in Viva Mars Vegas. 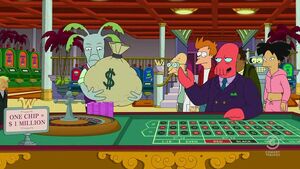 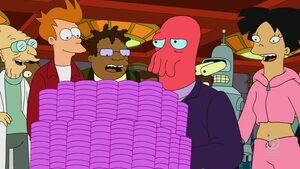 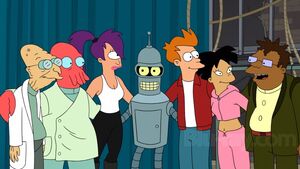 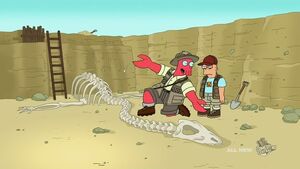 Zoidberg's cameo in the 2004 Daffy Duck TV short "Duck Dodgers in Attack of the Drones". 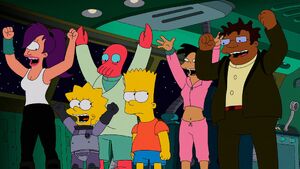 Add a photo to this gallery
Retrieved from "https://hero.fandom.com/wiki/Dr._Zoidberg?oldid=2238553"
Community content is available under CC-BY-SA unless otherwise noted.