Draco is one of the two protagonists of the 1996 movie, Dragonheart, alongside the knight Bowen. He is a heroic dragon who is the last of his kind and laments having given part of his heart to the evil King Einon.

He was voiced by the late Sean Connery, who also played James Bond, Henry Jones Sr. in Indiana Jones and the Last Crusade, John Patrick Mason in The Rock and Marko Ramius in The Hunt for Red October.

Draco first appears in a cave where he is approached by Prince Einon's mother Queen Aislinn and Sir Bowen, who implore Draco to save a fatally wounded Einon's life . Draco, however, can sense the evil in Einon's heart, and is therefore reluctant to help, also knowing that Einon's father was a cruel and brutal warlord. Eventually though, Draco agreed to save Einon, hoping that his heart could make Einon a better person. Instead, Einon proved to be no better after getting half of Draco's heart, and went on to become just as evil as his father ever was. Horrified at his actions, Draco retreated, also being pursued by Bowen, who believed that Draco's heart had made Einon evil.

For 12 years, Draco fled and hid, watching as his fellow dragons were slain until eventually he was the only one left. Pointing out to Bowen that the former knight will be out of a job if he kills him, the two agree to work together and con villages by having Draco attack them and then pretend to be slain by Bowen. As the two continue this scheme, they come to develop a genuine friendship, with Draco first getting this name from Bowen (his real name is, according to Draco, unpronouncable for humans). Draco also explains that only sufficiently viruous dragons get to go to their heaven, and that all others simply "disappear" when they die. Because Draco saved the life of a wicked individual, and used his own heart to do it, he knows full well that he will never be able to ascend.

Draco helps Bowen and his friends formulate a rebellion against Einon, but due to sharing a link with him in which they can feel each other's pain, it becomes clear that Einon cannot die so long as Draco lives. As a result, Bowen is ultimately forced to kill his friend to stop Einon. But in having given his life to stop Einon, Draco has sufficiently redeemed himself and his soul is allowed to ascend to the Dragons' Heaven, becoming the very brightest of the stars in it.

In the 2000 sequel Dragonheart: A New Beginning, it is revealed that prior to his death, Draco had an egg which hatched into Drake.

Draco was a wise-cracker with a sense of humor, but he was a very noble dragon. He was also selfless, giving up his life and the existence of his species to crucify Einon and save the kingdom. He partook in scams all over the countryside with his knight friend Bowen, though he had qualms over it. Like all dragons, Draco loved to sing when he felt happy and never attacked anybody unless they ambushed him in the first place. He was always ready to look for an alternative solution to an issue and persuaded Bowen to stop attacking him and use him for a gold scam in return for some time in the sunlight and heat. He was quite smart, extremely sly and was cynical about the status quo every now and then. He was quick-tempered, and he was ready to defend anybody for any cause. He was wise, sarcastic and unfailingly loyal. And he was also known as dignified, rational, aspiring, courteous, optimistic, diligent, reasonable, affectionate, courageous and organized. 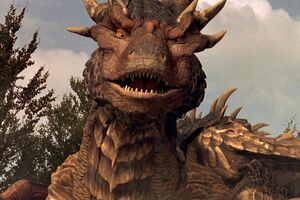 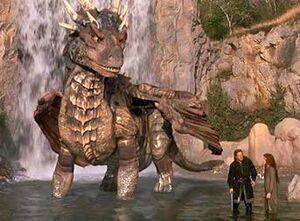 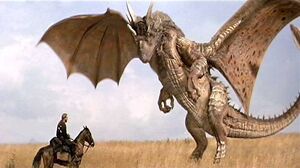 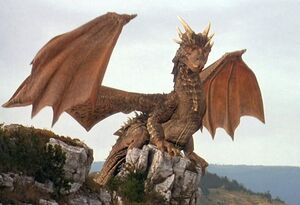 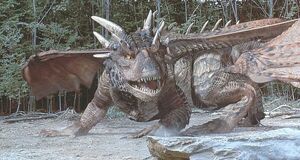 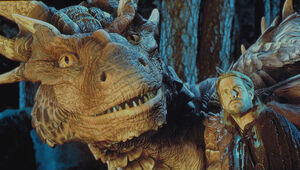 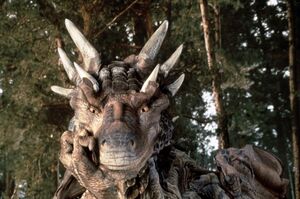