The Greatest Swordsman in the World

On and Off Mercenary

Dracule Mihawk better known as Hawk Eyes, is sometimes hero or sometimes villain. He was once a Shichibukai. He is currently the greatest swordsman in the world.

Mihawk is calm and collected individual. He shown his respects by seeking worthy opponents. He has no interest of fighting weak opponents or handicaps. He only trains those if they can defeat a humandrill.

He finds those amusing and interesting such as Luffy when causing troubles to the World Government. He has a soft side of after he gave up to fight Shanks after losing his left arm and no longer want to fight him any longer even during the war in Marineford as he only agrees to fight Whitebeard but fighting Shanks is not part of the deal and left the marines as he is not a coward.

After the Shichibukai are no more, Mihawk is not afraid or concern but rather excited since he wasn't being chased for a long time.

As the current greatest swordsman in the world, Mihawk is very powerful swordsman. 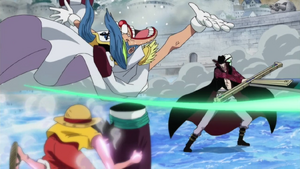